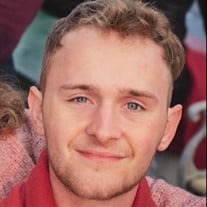 Wyatt Josiah Norman, age 22, left this world and went to be with the Lord Jesus on November 6th, 2020. Unmarried and without children, he was the son of Brian Norman and Kristie Fish, both of Citrus Springs Florida. Born in Grand Rapids, Michigan, Wyatt’s family moved to Citrus County Florida when he was two years old. He attended Seven Rivers Christian School in Lecanto, Florida from Pre-Kindergarten through his graduation in 2017. An outstanding student with a brilliant mind, Wyatt took honors courses, earned straight A’s throughout the entirety of his high school career, and graduated with a 4.5 GPA near the very top of his class. Upon graduation, Wyatt entered Santa Fe College in Gainesville Florida before transferring to the University of Florida, where he was majoring in Mathematics. Wyatt was a studious lover of history, mathematics, philosophy, biology, nature, and theology. He was a deep thinker, an avid reader and a vivid writer – striving for and achieving excellence in all subject matters that he studied. Self-disciplined in more ways than just academics, Wyatt was also a cross-country runner who often would wake up early and run several miles before beginning his day. Along with his stunning intellect, Wyatt was known for his humor, his different accents, and things he did to “get a reaction”. But most central to his character is the deep and sincere relationship Wyatt had and now even more deeply has, with the Lord Jesus, his Messiah. Wyatt is survived by his mother and stepfather, Kristie and Mike Fish and by his father and stepmother, Brian and Virginia Norman. He is also survived by his six siblings and their spouses, Jacob & Autumn Norman, Jeffrey Norman, Zebedee Norman, Franklin & Amanda Norman, and Tanisha Norman, grandparents Marshall and Alicia Carroll, Mert and Phyllis Norman, aunts and uncles, Tom and Angie Moore, Gabe and Kelly Carroll, Lucille Warner, and cousins Taylor Martin, Kaleb, Kohl, Eli, and Spencer Carroll, Colin Moore, Michael and Katie Warner, and many dear friends. He was preceded in death by his great-grandparents Margaret Carroll, Herbert Domke, Christina Domke, and aunt Julie Norman.

Wyatt Josiah Norman, age 22, left this world and went to be with the Lord Jesus on November 6th, 2020. Unmarried and without children, he was the son of Brian Norman and Kristie Fish, both of Citrus Springs Florida. Born in Grand Rapids, Michigan,... View Obituary & Service Information

The family of Wyatt Josiah Norman created this Life Tributes page to make it easy to share your memories.

Wyatt Josiah Norman, age 22, left this world and went to be with...

Send flowers to the Norman family.