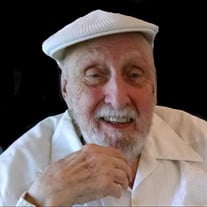 Psychologist, author and professor, Wilson Howland Guertin, 101, passed away peacefully at home on March 7, 2022, at home with his family. He was born on July 26, 1920 in Bridgeport, Connecticut and moved with his family to Gainesville, Florida in 1960. He held degrees from Rutgers and the University of Iowa. He was honored to receive his Ph.D. Sigma Cum Laude, the first doctoral degree in Clinical Psychology ever granted by Michigan State. He worked for many years as a clinical psychologist in Indiana, Illinois, Michigan and Iowa. For seven of those years he was employed by the VA. For one year he worked as a forensic psychologist for the Baltimore Court System. He served two years as Professor at the University of Baghdad in Iraq, where he met his wife, Azza Showket. He joined the College of Education at the University of Florida as Associate Professor in charge of developing their educational research studies. Dr. Guertin was one of the first faculty members to devote himself to learning computer programming. He created a library of statistical programs for the social sciences. A few years later he received a one-year Senior Fulbright Lecturing Fellowship to teach at Ein Shams University in Cairo, Egypt. Dr. Guertin was a Muslim convert, who made the pilgrimage to Mecca. He managed to visit over one hundred countries during his travels. His interests abroad lay in the Middle East and Latin America. He retired from his Professorship at the University in 1985 but continued his association as Professor Emeritus. He lectured part-time for another five years before retiring completely. He authored a textbook about statistical analysis and published over 100 articles in professional journals. When Dr. Guertin was 90 years old, he started a new career. He wrote novels based upon his travels and lifetime experiences. Sustained effort produced 14 novels, such as “Istanbul’s Secret Warriors”. At the age of 95, he celebrated 60 years of marriage to his third wife, Azza. He collected orchids and registered a new hybrid orchid with the Royal Horticultural Society and named it after Azza. Over the years he also obtained an extensive Ancient Coin and Oriental Rug collection. Dr. Guertin was preceded in death by wives Azza Showket Guertin and Helen Bale and son James Bale. He is survived by Lila Levinson, Michelle DuBois (John Lee), Leah Oehmig (Edward), Lila Guertin, Barry Guertin and Nadia Locke (Bruce) and a total of 40 offspring including great-great grandchildren.

Psychologist, author and professor, Wilson Howland Guertin, 101, passed away peacefully at home on March 7, 2022, at home with his family. He was born on July 26, 1920 in Bridgeport, Connecticut and moved with his family to Gainesville, Florida... View Obituary & Service Information

The family of Wilson H Guertin created this Life Tributes page to make it easy to share your memories.

Send flowers to the Guertin family.