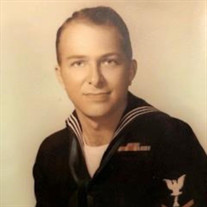 Bill Calton passed away on September 15, 2021, at the age of 94. He was born in Chiefland, Florida, on August 15, 1927, and moved to Cross Creek, Florida when he was only a month old. At 17, Bill joined the United States Navy and served as a photographer for almost 23 years. He was stationed in Key West, Florida, where he met and married his wife of over 72 years, Bobbie. Other duty stations include England, Norfolk, Pensacola, Boston, Washington, D.C., Alaska, and aboard the USS Boston. Bill retired in 1967 to Chiefland, Florida. He then worked at Learning Resources and Communications at the University of Florida’s J. Hillis Miller Health Center, retiring with 20 years as a medical photographer. He served as a fireman with the Cross Creek Volunteer Fire Department. He enjoyed photography, fishing, traveling in their motorhome, and square dancing. He also had the incredible skill of speaking to the deer that often visited his front yard. He was a beloved father, grandfather and great grandfather who always had “something to show you.” Bill is survived by his wife, Bobbie (Gladys) Hamilton Calton, and their children, Nancy Calton Cooper (Marion), Larry William Calton, and Carla Calton Connell (Chris). Grandchildren include Tracy Cooper George (Kade), Christy Cooper Nipper (Luke), April Calton Hulbert (Blue), Shelley Calton Rummel (Dusty), Lauren Calton Castillo (Cory), Michael Calton Connell, and Kristen Delaney Connell. Great grandchildren include Miles, Molly, & Maggie Nipper, Ryan George, Sailor & Reef Hulbert, Jillian, Jocelyn, & Jake Rummel, and Mara Castillo. Survivors also include many nieces, nephews, cousins, and friends. A gathering for Bill will be held on October 6th, 2021, from 5pm to 7pm at Williams-Thomas Funeral Home at 404 N. Main St. in Gainesville, Florida. In lieu of flowers, please make a donation to a charity of your choice in his name.

The family of William C. Calton (Bill, W.C.) created this Life Tributes page to make it easy to share your memories.