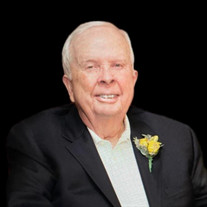 William C. (Bill) Willis, age 87, went to Heaven on August 27, 2021, and joined his wife who preceded him in death by seven days. Survivors include sons Cliff Willis and Steve Willis (Judy); three grandchildren, Katelyn Parham (Bobby), Kyle Willis (Salina), and Kory Willis (Kelsey); two great-grandsons, Luke Parham and Landon Parham and brother Robert G. Willis. He was preceded in death by his wife, Iva Mae Pitts Willis; parents Thomas Albert Willis and his wife Willie Adams Willis; and grandmother Lucy Harris Willis who raised him. Bill was born in Newton, MS in 1934 and graduated from Glade High School, Laurel, MS. He attended Jones Jr. College, University of Mississippi, and received his Bachelor of Science degree from Mississippi College in Clinton, MS. After serving two years in the US Army (tour of duty in Korea), Bill worked at Bush Dairy, Laurel, MS; Yazoo Mfg. Co. Jackson, MS; Mississippi State Department of Education; Southern Farm Bureau Casualty Ins. Co., Jackson, MS; Louisiana Farm Bureau Ins. Co., Baton Rouge, LA, and Florida Farm Bureau Ins. Co, Gainesville, FL. Bill was a very involved father and grandfather. He loved taking them to Disney World and being part of their lives and activities as they grew. His great-grandchildren brought him renewed laughter and joy. He was an avid golfer and loved the game. Bill was a long-time member of Westside Baptist Church and the Jabez Bible Life Group. He invites all of you to join him in Heaven one day. John 14:6, Jesus said “I am the way and the truth and the life. No one comes to the Father except through me.” There will be a private funeral service. In lieu of flowers please consider a donation to the Single Mom’s Ministry at Westside Baptist Church, Gainesville, FL.

The family of William "Bill" C. Willis created this Life Tributes page to make it easy to share your memories.

Send flowers to the Willis family.