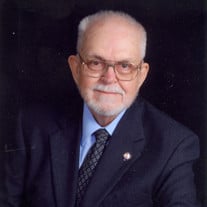 On November 24th, 2021, William M “ Bill” Weldon passed away quietly in his sleep surrounded by his family. Bill is survived by his loving wife of 67 years, Emma Lou; his three sons, Mike (wife Pam), Alan (wife Beth), and Doug; 5 grandchildren, Hailey (husband Andy), Sarah (husband Jeff), Murphy, Polly, and Mac; 3 great-grandchildren, Tyler, Brooke, and Layne; he is also survived by his two sisters, Sandra Faulkner (Jeff), and Diane Weldon Montgomery. Bill was born on April 16th, 1932, and was a lifelong resident of Gainesville. One thing is for sure, everybody knew Bill Weldon. He was a veteran of both the Navy and the Army, first having served as a radarman on the heavy cruiser the USS Saint Paul in Korea. Bill met the love of his life at the Florida Theater on University Ave where he worked as an usher and Emma Lou sold tickets. This began an amazing 67- year love affair together. He left the theater to work as an ambulance driver for Williams-Thomas Funeral Home. Ambulances were frequently run by funeral homes in that era. Knowing when Emma Lou was working at the theater, he would always run the siren through town as he went by to say I love you and I’m pretty sure to show off. While attending the University of Florida and serving in the Naval reserve, Bill assumed he didn’t need to attend all of the required meetings, he received a “Greetings and Salutations” letter from Uncle Sam informing him that his assumption was incorrect. He was given the choice of active duty in the Navy or the Army. He chose the US Army. After completing his basic training, he returned home and took Mom to the skating rink. He wrote about that day years later this way “I met the most beautiful girl I have ever seen, for me, it was love at first sight. After months of dating, I asked the love of my life to marry me. She said that one word that affected all our lives… she said Yes. I love your mother more each and every day, my prayer is that you have as full a life as that your mother and I have experienced. I’m writing this to let you know how much I love your mother and how proud I am of you as my sons. Look at your family, your work, your wives, and your children, none of this would have happened if the love of my life had not said “Yes.” He had a long career working for the City of Gainesville Utilities as a Systems Engineer starting at the power plant and eventually running the energy distribution center. Later he became the City Manager in Starke FL. Bill was always at the front, leading by example whether as a deacon in the church, serving on the Florida Municipal Power Board of Directors as well as Regional Commissioner Emeritus of Clan Donald USA. He relished his Scottish heritage and fine single malt scotch. He also had an incredible sense of humor and was a shining example of what happens when the brilliant mind is left to its own devices. In the 1970s the local radio station WGGG held a contest where the “G” had been stolen and they would borrow a G from other stations until it was found. Listeners would follow clues all over town looking for the missing G. Bill, seeing the opportunity would cut the giant G from the Westinghouse boxes at the Downtown Power Plant and place it in the bushes. A “lucky” listener searching the area would find it, jump in their car, and raced across town to the station at which time he would cut out another one and have more fun. Unlike everyone else, Bill loved telemarketers, he took it as a personal challenge to keep them on the phone as long as possible, often engaging in lengthy conversations that usually included him hilariously trying to mimic their accent. He did his best to take them off subject showing genuine interest just to keep them on the phone a little bit longer. He would always have that look of smug satisfaction when they finally hung up in frustration. If you want to know what true love sounds like, it is this. He once wrote “when we were first married, we lived in a trailer park in Georgia where I was stationed. I was sent to Germany where she followed me as soon as I secured housing. She was traveling alone and pregnant at the time with Mike who was born in Heidelberg. She then moved with me to Gainesville when I was discharged and has given me three wonderful sons, she has defeated cancer and is the blessing and love of my life. I truly shudder to think about where I would be today without her. I love her so.” Bill was an amazing example of how to be a husband and father. Again, leading by example. Rest in the glory of God, until that day when we will all be together again. A funeral service for Bill will be held on Monday, November 29, 2021, at 11:00 a.m. at North Central Baptist Church 8001 NW 23rd Ave, Gainesville, FL 32606. The family will receive friends from 10:00 A.M. to 11:00 A.M. Interment will follow at Forest Meadows Central Cemetery 4100 NW 39th Ave, Gainesville, FL 32606 In lieu of flowers, memorials may be made in Bill’s memory to North Central Baptist Church or Northwest Baptist Church.

The family of William "Bill" M Weldon Jr. created this Life Tributes page to make it easy to share your memories.

Send flowers to the Weldon family.