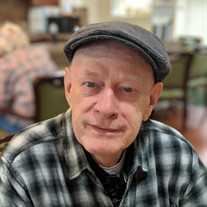 William “Bill” Puckett, 76, passed away on October 20, 2020 at the Windsor of Gainesville in Gainesville, FL after a long battle with early-onset Alzheimer’s disease. Bill was preceded in death by his wife of 44 years, Sally. He is survived by his son David Puckett of Staunton, VA , and his brother Thomas Puckett of Denver, CO. He was born in Tulsa, OK, on August 9, 1944, the eldest of two sons born to Howard and Genevieve Puckett. Bill was a loving husband, father, and uncle, and quick to make friends with his warm smile everywhere he went. Raised in Cherryvale, KS, Bill was voted most likely to succeed in the Cherryvale High School class of 1962 and played varsity basketball and appeared in several plays. At Kansas State College of Pittsburg, he earned a Bachelor of Science degree in Business Administration and met the love of his life, Sally Annette Souder. Bill went on to earn his Master of Business Administration (Health Care Administration) at George Washington University in Washington, DC. Bill was a respected leader in the field of healthcare. He worked at Decatur Memorial Hospital in Decatur, IL from 1971 to 1987, rising to the position of Senior Vice President. In 1987, he took a position with AvMed-Santa Fe and served in a variety of positions, including Chief Operating Officer of Alachua General Hospital in Gainesville, FL. Bill finished his career as the CEO/Administrator of Accent Physician Specialists in Gainesville, retiring in 2005. He was a life fellow of the American College of Healthcare Executives, and active in various community organizations including the United Way and Rotary International. A special thank you to the staff of The Windsor of Gainesville for their gracious care and support during his residence there. Due to health concerns, the family has chosen to do a memorial service at a later date.

The family of William "Bill" Puckett created this Life Tributes page to make it easy to share your memories.

Send flowers to the Puckett family.