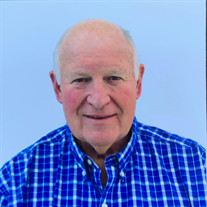 William Lloyd Brown Jr, “Bill”, retired Extension Director and Professor Emeritus, UF/IFAS, passed away peacefully on April 17, 2021. He was a resident of Gainesville and of Cedar Key, where he built his dream retirement home with the love of his life and wife of nearly 54 years, Sue. He was born May 3, 1946, in Morganfield KY, to the late William L Brown Sr, spending his childhood on his family’s farm until moving to attend college at Austin Peay State University where he met his wife and they married July 2, 1967. Bill went on to graduate with his Master’s from the University of Georgia and served in the United States Coast Guard, where he was awarded the Helicopter Rescue Award. He settled in North Florida in 1975, initially living in Trenton and serving as an Extension Agent in Gilchrist County. In 1980, Bill and his family moved to Gainesville where he served as the Extension Director, with an emphasis in row crops, until his retirement in 2007. Bill was instrumental in starting the Alachua County Youth Fair and Livestock Show and was the driving force behind it while he was the Extension Director. The Alachua County Youth Fair Board was reorganized under his leadership and held the first show in 1981 at the Gainesville Livestock Market. He served as Treasurer and President of the Florida Association of County Agricultural Agents and was appointed to the Alachua County Rural Concerns Committee. Bill served on the Alachua County Farm Bureau board from 2007-2020. He was extremely instrumental in the ACFB scholarship program in support of our youth. He also served on the advisory board of Preserving Rural Property Values (PRPV) for many years up to the present. Bill was a leader with a “walk the walk” attitude. He would never ask somebody to do something that he had not done or would not do himself. Bill was a teacher, mentor, leader, and respected within the community. His knowledge of agriculture was vast and appreciated by all his producers. One former colleague said “We have lost one of the all-time great storytellers in extension. He was an old-school agent, which meant that he was all about helping local people. He was also one of those people that people wanted to hear what he had to say“. Bill was an avid fisherman, spending many weekends fishing with his son and close friends whom he also considered his family. He was a member of Grace United Methodist Church and also attended Cedar Key United Methodist Church. Bill is also survived by his son and daughter-law, Jeremiah and Chontelle, and granddaughter Chesney of Fort White, sister Zella (Tommy) Wallace of Sturgis KY, and brother John Mark of Morganfield KY. Graveside services will be held Thursday, April 22 at 10:30 at Cedar Key Cemetery. Bill enjoyed being ‘out in the county’ and would want everyone to be comfortable, please dress casually. In lieu of flowers, the family asks that donations be made to the Bill Brown Scholarship Fund, Alachua County 4-H, Attn: Dr. Cindy Sanders, 106 SW 140th Terr Suite 3, Newberry, FL 32669.

William Lloyd Brown Jr, &#8220;Bill&#8221;, retired Extension Director and Professor Emeritus, UF/IFAS, passed away peacefully on April 17, 2021. He was a resident of Gainesville and of Cedar Key, where he built his dream retirement home with... View Obituary & Service Information

The family of William "Bill" Lloyd Brown Jr. created this Life Tributes page to make it easy to share your memories.

Send flowers to the Brown family.