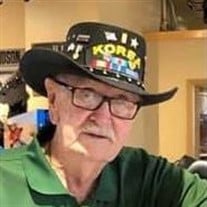 Walter F. Starr, Jr., age 86, passed away on January 20, 2021, in Gainesville, Florida. Walter was born in a small village named Pomona which consisted of approximately 5 homes outside of a small country farming community of Chestertown, MD. He was born in the home that he was raised in and lived in until he entered the military in January 1953. He had two younger brothers who preceded him in death and six half brothers and sisters from his mother’s previous marriage who also preceded him. He spent his younger and teenage years working on a local farm up until he entered the U.S. Air Force in January 1953 and served until January 1957. Prior to his enlistment ending in 1957, Walter met his beloved wife Evelyn and after a week’s courting were married in Yuma, Arizona. Walter is preceded in death by his beloved wife of 67 years Evelyn. They had three children, Melodie Starr Lynch, Hollie Starr, and Bret Starr, he also had six grandchildren, Amy Lynch, Karen Lynch, Mike Lynch, Brandon Starr, Bryce Starr, and Ben Starr Ervin, and six great-grandchildren. Walter joined the Alachua County Sheriff’s Office in February 1965 and retired in March 1986. During his time there he accomplished many first’s in the department with one being the first office to retire straight from active duty into retirement and retired as a Lieutenant. He and Evelyn did a lot of traveling on their motorcycle and loved riding as much as they could. He was a life member of the Blue Knights Law Enforcement motorcycle club which is an international organization and members consist of Law Officers and retired Law Officers. He also belonged to the Fraternal Order of Police (FOP), a life member of Veterans of Foreign Wars, a life member of BPOE Elks, and a member of the Korean War Veterans Association (KWVA). Memorial service will be held on Saturday, January 30, 2021, at 11:00 a.m. WILLIAMS-THOMAS FUNERAL WESTAREA 823 N.W. 143rd street Newberry, with Dr. Don McGarity officiating. In lieu of flowers, memorials may be made in Walter’s memory to the VFW at www.vfw.org & Law Enforcement Fund at www.policefoundation.org

Walter F. Starr, Jr., age 86, passed away on January 20, 2021, in Gainesville, Florida. Walter was born in a small village named Pomona which consisted of approximately 5 homes outside of a small country farming community of Chestertown, MD.... View Obituary & Service Information

The family of Walter F. Starr Jr. created this Life Tributes page to make it easy to share your memories.

Send flowers to the Starr family.