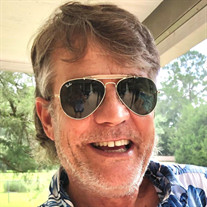 Wade Charles Jones passed away doing what he loved on Saturday, October 16th in a motorcycle accident while vacationing in Georgia. Wade’s proudest legacy is his two daughters, Shelby and Hayley, and his beautiful grandchildren, Marley Mae (3 years old) and Bodhi Wade (1 year old). Wade also leaves behind five siblings: Debra Jones Baker, Kim Oliver, Terri Straughn, Lora Floyd, and Troy Cunningham; as well as the mother of his children, Lynn Jones; his mother-by-marriage, Veronica Jones; and his girlfriend, Laura Weill-Nelson. Wade was born December 12, 1961 in Gainesville, FL on his Grandfather, Wade Charles Kite’s birthday. He was welcomed into the world by his parents, Shirley Kite and Albert Jones. Wade grew up with four sisters: Debi, Kim, Terri, and Allison; later gaining a fifth sister, Lora, and a brother, Troy. With many loving aunts, uncles, and cousins also in the mix, a dull moment was impossible to find. Wade spent his childhood in Gainesville, eventually graduating from Gainesville High School with the class of 1979. At 21 he moved to Murray, Kentucky with his wife, Lynn. Wade attended business school at Murray State University for a short time before discovering, to the surprise of no one now, this did not provide the excitement he craved. In 1984, they moved back to Gainesville where Wade would begin to pursue his career as a firefighter and eventually become the legendary paramedic that he was. In 1988, Wade and Lynn welcomed their first daughter Shelby, followed two years later by Hayley. Wade had many passions and hobbies in life but above all he loved spending time with his family. Years were spent laughing together while playing video games, board games, showing off dance moves, or swimming in the pool. Summers were a non-stop game of Marco-Polo to a soundtrack of Hootie and the Blowfish or Tom Petty. Even as the girls grew up, the playing never stopped. Wade was always ready for a game of cornhole, giant jenga, ring toss, or more fun in the pool with the grandkids. If you’ve ever shared a minute with Wade, you’ve likely shared a laugh, and if you’ve ever shared a meal together, there was probably Tabasco involved. Wade was many things to many people but always his one-of-a-kind self in every relationship and situation. He was a hero in the first responder community and saved countless lives during his years serving as a firefighter/paramedic for Alachua County and then as a flight paramedic for ShandsCair. He was not only who you wanted by your side in an emergency or crisis but also who you wanted on your trivia team (if you’ve ever watched Jeopardy with him, then you know). He was a listening ear in a difficult time and a reminder not to overthink a problem and enjoy what you have. He was a loyal friend, the fun uncle, and a loving son and brother. Most importantly, he was Dad to his daughters and “Goondah” to his grandchildren who all return his immense and eternal love for them. One of Wade’s favorite sayings was “I’m here for a good time, not a long time.”, and while the time was not long enough by the measure of those still here, there is peace in knowing he made sure the time was good. Wade was not one for rules, but he strove to live by the “Golden Rule” and regularly encouraged his daughters to do the same. He knew God and often stated with conviction that he knew where he was going after this life. He was well aware of the preciousness of life from his work, and he knew how to make time count. He imparted his fun-loving attitude on the many lives he touched and wanted everyone to join the party. He was always there with a hug, an “I love you, man”, and a cup of coffee. He found joy in making people laugh and feel loved, and at that he excelled beyond measure. Many are alive today because Wade lived and many more know love and laughter because they shared it with him. Wade’s life gave us immeasurable gifts and although there will forever be an aviator-shaped hole in our hearts, he would want us to follow his example and fill it to the brim by caring for each other and enjoying all the good times we can. A celebration of Wade's life will be held on Tuesday, October 26, 2021, at 10:00 a.m. at The Family Church 2022 S.W. Gainesville, FL. With Rev. Rick Thompson officiating. For those unable to attend the celebration will be livestreamed through The Family Church website; go to: www.thefamilychurch.tv.

Wade Charles Jones passed away doing what he loved on Saturday, October 16th in a motorcycle accident while vacationing in Georgia. Wade&#8217;s proudest legacy is his two daughters, Shelby and Hayley, and his beautiful grandchildren, Marley... View Obituary & Service Information

The family of Wade Charles Jones created this Life Tributes page to make it easy to share your memories.

Wade Charles Jones passed away doing what he loved on Saturday,...

Send flowers to the Jones family.