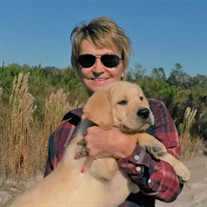 Veleita “Cissy” Walker peacefully went home to be with our Lord, Wednesday, June 9, surrounded by her family. It was the final chapter in her 11 year heroic fight against colon cancer, in which she exceeded every medical prognosis through her determination, courage, positive attitude and refusal to quit against all odds. Cissy was born on May 1, 1954 in Columbia, South Carolina to Cecil and Veleita “Nene” Davis. As her family was military, she spent time in Ulm, Germany before returning to Brooker and then Gainesville in 1967. She attended Westwood Junior High School and Gainesville High School, graduating in 1972. Shortly thereafter, she began working at Sante Fe Health Care as an executive secretary for CEO, Mr. Ed Peddie. She then enrolled in the AvMed continuing education program and earned her degree from the University of Central Florida in Medical Records Administration. She continued for many years with AvMed, became a Certified Fraud Examiner and was made the AvMed Director of Fraud and Abuse for the State of Florida, where she routinely worked with the FBI, until she retired in 2013. Cissy was a devoted wife and best friend to her husband of 39 years, Steve. The two of them loved being out on the water together and spent many years doing so at Cedar Key, the Bahamas, BVI and Key West, where she was a lobster catching machine. She was also a scuba diver and became an expert snow skier. Her Labrador retrievers were a large part of her life and the two boys, Cody and Gunny were there when she departed this world. Many people were victims of her mischievous sense of humor and her smile and laugh were contagious. She did so enjoy sharing a good glass of wine with her many, many friends, oftentimes at Gator football games. She leaves behind a huge void and will be sorely missed by all that knew her. She was preceded in death by her mother Veleita “Nene” Lovelace and is survived by her loving husband, Steve, her father Cecil Davis (Myrna), her daughter Tina Brown (David), her brother Glenn Davis (Ardis), 7 half brothers/sisters, her granddaughter Lacey Baldwin (David) and her great granddaughter arriving in September, Gracie Jane Baldwin. A celebration of Cissy’s life will take place on Thursday, June 17th, 2021 at 11:00 a.m. at First Presbyterian Church, 106 SW 3rd St, Gainesville, FL 32601. The family would encourage everyone to be aggressively proactive regarding their GI health and get tested when medical advice dictates. In lieu of flowers, the family would appreciate any donations to First Presbyterian Church, Gainesville

Veleita &#8220;Cissy&#8221; Walker peacefully went home to be with our Lord, Wednesday, June 9, surrounded by her family. It was the final chapter in her 11 year heroic fight against colon cancer, in which she exceeded every medical prognosis... View Obituary & Service Information

The family of Veleita "Cissy" Walker created this Life Tributes page to make it easy to share your memories.

Veleita “Cissy” Walker peacefully went home to be with our Lord,...