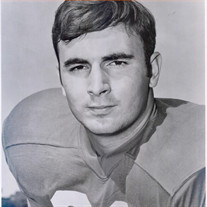 Timothy “Tim” Alan Good, age 72 of Gainesville, FL, passed away peacefully on Friday January 14th, 2022 after an extended illness. He was born to Major Paul E. Good and Margie E. Good on July 26th, 1949 in Fukuoka, Japan. The family later settled in Gainesville in 1959 after his father’s retirement from the U. S. Army. He graduated from Gainesville High School in 1968, where he was a member of the Varsity football team. He later attended the University of Florida and was a defensive end for the Florida Gators from 1968 to 1970. He began his career with the Alachua County Sheriff’s Office in 1971. He then transferred to the Gainesville Police Department from 1972 to 2004, where he took pride in being known as Officer Friendly throughout the local school system. After his retirement as (a Lieutenant) from GPD, he continued his career with the United States Marshall Service and worked at the Federal Courthouse in Gainesville, FL, where he retired in 2018. Throughout his life, he was passionate about hunting, fishing, golfing, and bowling. His love for bowling began with his father and continued with their memberships in several leagues. Nothing made Tim happier than spending time with his family, friends, and watching Gator football. Tim Good is survived by his two children, Timothy “TJ” Alan Good Jr. (Katie), daughter Caroline Elizabeth Good; his brother Paul E. Good Jr. (Mary); his sister Linda A. Pellicci (Joel); and long-time girlfriend Judy Locascio. He is also loved by and remembered as a best friend, uncle, and beloved cousin. The family would like to thank Tim's "band of brothers" - his law enforcement friends and football teammates for their unwavering love and support. There will be a public celebration of life service at the Gainesville Women’s Club on Saturday, January 29th, 2022, at 11 AM. He would appreciate if everyone wore either Florida Gator colors of orange/blue or Gainesville High School colors of purple/white. Per his request, donations may be made to the Special Operations Wounded Warriors charity (SOWW) at https://sowwcharity.com or to 820 67th Ave N #7508 Myrtle Beach, South Carolina 29572.

The family of Timothy “Tim” Alan Good created this Life Tributes page to make it easy to share your memories.