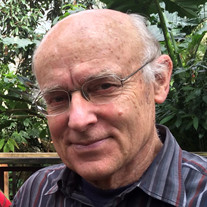 Thomas D. Rider, longtime Gainesville resident and former co-owner of Goerings Book Store, passed away on Thursday, March 17, 2022. Tom was a profoundly curious, constant learner, and an avid reader with an excellent sense of humor, who loved to playfully tease and be teased by friends and family. He will be deeply missed as a father by his three children and as a wonderful partner by spouse Jane Brockmann, retired UF professor of Biology. Born in 1939, Tom grew up in Garwin, Iowa, a small town in Tama County, sixty miles northeast of Des Moines. Garwin, population less than 700, was surrounded by fields of corn, oats, clover, and soybeans. His father Harold Rider was a grocer and, for many years, the Tama County Assessor. His mother Ferne Duncan taught Latin and English at Garwin High School and later, while raising her three sons, was a substitute teacher. Growing up in small-town Iowa formed the core of Tom’s character, both in terms of his love of community and his commitment to civic life. After high school, he continued his strong Midwestern public education, earning degrees at Iowa State University, University of Michigan, and the University of Minnesota. While pursuing his PhD, Tom won a Fulbright to study in Delhi, India, living there from 1967 to 1968 and visiting again from 1970 to 1972. His field of scholarly interest was South Asia, with a dissertation on the economic policies of the British in India. Tom’s time in India fostered an expansive love for Indian cultures, cuisines, and history. Visiting India again in the 1990s was a highlight in a lifetime of enriching travel and passion for spending hours in even the smallest museums. In 1972, Tom moved to Gainesville and started working at Goerings Book Store, becoming the co-owner with Betty Ann Sisler Rainbow in 1981. Goerings, first at University and Thirteenth, later in the Westgate Shopping Center and then back to College Park, was the perfect melding of his father’s retail background and Tom’s own academic bent. The bookstore was for many years a treasure for readers and a true hub for the local community. Many Gainesvillians recognized him from the store or from hearing his voice in the book reviews he did on WUFT-FM public radio. In addition to the bookstore, Tom was committed to many civic organizations, serving on the boards of the American Booksellers Association, the ABA’s Foundation for Free Expression, the Alachua County Library Board of Trustees, and the Alachua County Library District Foundation. His passion for the performing arts led him to the boards of Pro Arte Musica, Acrosstown Repertory Theater, and The Gainesville Orchestra, among others. For most of his fifty years in Gainesville, Tom lived in College Park. He loved the neighborhood, created a beautiful yard, and also served on multiple local planning and neighborhood associations. In addition to India, Tom traveled extensively, with an architecture guidebook always in hand. For the past few decades, Tom and Jane went on many trips with Tom’s brothers, Bill Rider, of Galveston, TX and his wife Gail, and Alan Rider of San Francisco, CA and his partner Chandra Katikireddy. Soon these ‘Brothers Trips’ expanded to include Jane’s brother, Tom Brockmann, and Tom Rider’s cousins Tina and Donald Fields (whom Tom inspired to move to Gainesville). But Tom and Jane’s most frequent destination was New York City to visit his daughter Leslie, his son Andrew and husband Tsuyoshi Yoshida, and his son Peter and husband Glenn Hill, and Tom’s grandchildren, Sarah, Calvin, and Silvia. Tom was incredibly grateful for the rich, fulfilling life he led, as a reader, citizen, joker, and father. He recognized how lucky he was to find a perfect partner to share it with in Jane. His absence will be deeply felt, but his life celebrated. Memorial donations may be made in Tom’s memory to the Alachua County Library District Foundation (acldfound.org), 401 East University Avenue, Gainesville, FL 32601. A celebration of life will be held later this spring.

The family of Thomas Rider created this Life Tributes page to make it easy to share your memories.

Send flowers to the Rider family.