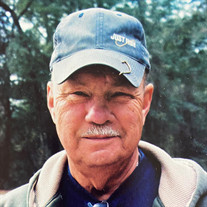 Thomas F. Clark of Lake City, FL, passed away unexpectedly on 3/31/22 after a short hospitalization. Tom was born in Plattsburg, NY, raised in Chicago, IL, settled in the northwest suburbs of Chicago, and retired in Florida. After serving in the U.S. Army in Korea and Laos during the early 1960s, he had a long career designing first responder radio systems for Motorola. Upon his retirement in 2002, Tom moved to Lake City, where he quickly adapted his fishing skills from crappies to specks, walleye to bass, (not to mention Old Style to Natural Light), as well as discovering redfish, sea trout, and scalloping along the coastline of Horseshoe Cove. He loved wildlife, nature, woodworking, reading, and “puttering” around his garage and workshop that he endearingly nicknamed his “good$#!+” rooms. Tom/T.C. was beloved by family and friends alike for his steady, reliable, and loyal presence in our lives. His ever-present humor was the source of a lifetime of laughter and remains a great source of poignant memories. He shared his love of adventure and the outdoors with us all, and many of us had the joy of accompanying him on fishing, hunting, and various other “strategic missions.” More importantly, he enjoyed meeting people and diving into their “life stories.” He was a commanding yet non-threatening presence in any workgroup, bar, or social gathering he became part of, and people not only gravitated toward him but subsequently sought him out on repeat visits. His defining characteristic was his loyalty. He met his wife Diane Ely in Horseshoe Beach, FL. While they were both widowed and not seeking to remarry, their shared love of life led to love for each other and, ultimately, their marriage in 2008. They were smitten, inseparable, and spent every available minute enjoying each other’s company. Similarly, Tom had enjoyed a long and happy marriage to Georgeann (Schwenn) Clark. They married in 1975, and prior to her passing in 2006, they enjoyed their time alternating between his outdoor activities, her passion for photography, and their shared love of live music. it was not unusual for them to spontaneously “go for a drive”, discovering new places and meeting new people along the way. He embraced and loved her children, Sandi and Jim, as his own. Family and friends consistently remained the center of Tom’s life. From their roots in Chicago, the bonds they forged remained strong even as they ventured forth and pursued their lives around the country. Tom, his brother Harry, and his sister Helene along with each of their respective children, all reside in different states yet remain extremely close. His “sandbox friends“Joe Ignoffo and Dick Lovins have stayed connected throughout the last 80 years. Our family is grateful for the great friends he gathered throughout his life, including Jack, Mike, Ray, Bob, Bill, J.D., Paul, Cliff, and Ray, to name just a few . . . Tom is survived by his wife Diane Ely, daughter Sandi Moore, former-son-in law Nick Masi, son Jim (Shari) Clark Moore, Diane’s sons Troy (Sheryl) Ely and Barry Ely; seven grandchildren: Lauren (Corry) Wiens, Nicholas (Danielle) Masi, Jennine (Tristan) Sullivan, Marin (Josh) Huver, Keenan Moore, Kellan Moore, Caidan Moore, and eight great-grandchildren: Judah Wiens, Everett Wiens, Emmeline Wiens, Nicholas Masi, Lucius Masi, Phinehas Masi, Moriah Masi, and Noah Sullivan. He is also survived by his brother Harry (June) Clark, sister Helene Roling and seven nieces/nephews: Cindy (David) Kraayeveld, Kathy (Jokull) Clark, Christine (Mary) Clark, Mark (Rebecca) Roling, and Tom (Christy) Roling, Jennifer (Kari) Beavers and Heather (David) Kadonsky. He was preceded in death by his previous wife Georgeann, parents Harry and Isabelle Clark, brother-in-law Edward Roling, sister-in-law Arlene Gilbert, sister/brother-in-law Violet and Max Beavers, niece Janet Roling, and nephew Edward Roling. Due to the suddenness of his passing, as well as the distance and inability to travel for so many close relatives and friends, an online celebration of life will be held at a later date. In lieu of flowers, please consider a donation to St. Jude Children’s Research Hospital.

Thomas F. Clark of Lake City, FL, passed away unexpectedly on 3/31/22 after a short hospitalization. Tom was born in Plattsburg, NY, raised in Chicago, IL, settled in the northwest suburbs of Chicago, and retired in Florida. After serving in... View Obituary & Service Information

The family of Thomas F Clark created this Life Tributes page to make it easy to share your memories.

Send flowers to the Clark family.