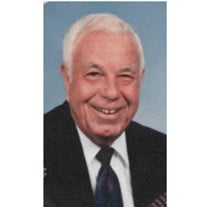 Theron Smith, a devout follower of Christ, was always an early riser and so it only seems fitting that he began his journey to live with his Lord and Savior at 6:00 AM on Sunday, January 3, 2021. He knew that he had somewhere important to be. It was the most joyous of occasions as he was reunited with his wife of 68 years, Jane. Born in 1927 in the small town of Micanopy, Florida, Theron was the son of Thomas and Luella Smith. As a member of the Greatest Generation, Theron served his country by enlisting in the Navy during the final year of World War II and was assigned to a Landing Support ship in the Pacific Theatre. Following his enlistment, he returned to Jacksonville, Florida where he had been raised. For most of his adult life, he worked in the garden supply industry, first as a traveling salesman and then as President and co-owner of a retail/wholesale business in Jacksonville known as Seedsmiths’ Incorporated. Those who frequented his stores knew him to be a knowledgeable and trustworthy businessman. Having a strong presence and reputation within the horticultural community, he held numerous leadership positions within various trade and city organizations. To summarize Theron’s many memorable attributes in just a few words is a difficult task. Foremost he was a devoted family man. His marriage to Jane Newton Smith was a wonderful example of a truly loving marriage. Together they raised two children, a daughter Cindy and a son Howard. Though certainly biased, both could not imagine a more supportive and loving father. As everyone he met would attest, Theron was also a very proud grandparent and great-grandparent. He deeply loved and admired his grandchildren, Andy, David, Elizabeth, and Mitchell and his great grandchild Cruz. Among his interests, Theron loved to travel throughout the United States with his family. He was an avid University of Florida sports fan and long-time football season ticket holder. Nothing suited him more than being outdoors, either fishing at his lake retirement home or hunting on the family farm in Micanopy. Theron had a keen sense of humor and none could spin a better story than he. We will all miss him terribly. However, we know that he is standing before his Heavenly Father and hearing the words we would all wish to hear: Well done Theron! Well done. An intimate graveside service will be held on Thursday, January 7, 2021 at 11:00 a.m. in Riverside Memorial Park, 7242 Normandy Blvd. Jacksonville for immediate family. In lieu of flowers the family requests that you make a donation to your favorite charity in memory of Theron.

Theron Smith, a devout follower of Christ, was always an early riser and so it only seems fitting that he began his journey to live with his Lord and Savior at 6:00 AM on Sunday, January 3, 2021. He knew that he had somewhere important to be.... View Obituary & Service Information

The family of Theron Smith created this Life Tributes page to make it easy to share your memories.

Theron Smith, a devout follower of Christ, was always an early...

Send flowers to the Smith family.