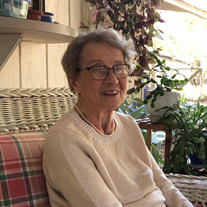 Theresa Emma Gyllstrom, age 100, of Gainesville, FL went to be with the Lord, Friday, January 15, 2021. Theresa was born November 3, 1920, to Rudolph and Hulda Jans Zilke in Chicago, IL. Her parents were immigrants from Germany who fully embraced the life and opportunities of America. Theresa had two younger siblings (now deceased) Margaret “Marge” Kostecki and Rudy Zilke, both of Chicago. Theresa married Harold “Rusty” Melvin Gyllstrom on June 7, 1947, following his service in the Army Airforce during WWII. They lived in her father’s apartment building in Chicago until they bought their first home in Riverdale, IL. Together, they raised two sons, Thomas, and Gregory. Theresa worked for Paramount Studios before marriage and then later as an office manager/bookkeeper for a department store chain. Her focus, however, was always on her family. She was known for her fabulous cooking and baking (renowned for her coffee cakes, pies, and for the Christmas cookies she distributed to the entire family until the age of 98) and for her tireless devotion to her husband and sons. She especially enjoyed Sunday dinners with her parents and Marge’s family, their worldwide travels, semi-annual Fripp Island family reunions, Gyllstrom family picnics, and extended family weddings and events. Later in life, she also enjoyed playing bridge, mahjong, puzzles, and betting the family fortune on dollar bingo. Theresa and Rusty retired first in St. Petersburg and then to Spring Hill, FL where they lived until Rusty’s passing. In 2011 she moved to live independently at The Village of Gainesville to be close to Tom and Helen. She became a member of Trinity United Methodist Church. Theresa is preceded in death by her beloved husband of 62 years, Harold “Rusty” Melvin Gyllstrom her sister Margaret Kostecki, and brother; Rudy Zilke. She is survived by her sons, Thomas (Helen) of Gainesville, FL and Gregory (Deborah) of Chagrin Falls, OH, She adored and was adored by her four grandchildren who produced nine great-grandchildren: Erica (Brad) Welter of Houston, TX, and their children Hudson and Hayden, Byron (Jessica) of Takoma Park, MD and their twin children Logan and Cassidy, Ann (Brandon) Pilzner of Kalamazoo, MI and their children Tony, Natalie, Nora, and Luca, and Marie (Chris) Kohne of Brookfield, IL and their son Elliot; as well as over 200 extended members of both the Gyllstrom and Kostecki families. At age 100, Theresa truly lived a full and happy life. Theresa will be laid to rest next to her husband at Nativity Lutheran Church in Spring Hill, FL. No public services are planned at this time. In lieu of flowers, please remember Theresa by performing an act of kindness or make a memorial contribution to your favorite charity.

Theresa Emma Gyllstrom, age 100, of Gainesville, FL went to be with the Lord, Friday, January 15, 2021. Theresa was born November 3, 1920, to Rudolph and Hulda Jans Zilke in Chicago, IL. Her parents were immigrants from Germany who fully... View Obituary & Service Information

The family of Theresa Emma Gyllstrom created this Life Tributes page to make it easy to share your memories.

Theresa Emma Gyllstrom, age 100, of Gainesville, FL went to be...

Send flowers to the Gyllstrom family.