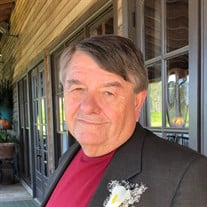 Ted Lavon Belser, 67, passed away on August 10, 2021. Ted was born in Arcadia, Florida on October 2, 1953 to Walter Belser and Ruth Mixon. Growing up in a small town, he lived the life of a proud American boy. In high school, he played football and dated his future wife, Mariea Belser. A hard worker, Ted proudly spent time picking watermelons, working as a bag boy, and then as a draftsman for a local engineer. As a draftsman, he found his passion for engineering and worked 6 years through Manatee Community College before attending the University of Florida where he Graduated with a B.S. in Mechanical Engineering. After college, Ted remained in Gainesville. He designed and built the house in which he proudly lived for 40 years. He worked 19 years as a Professional Engineer for CH2MHill before starting his own practice, Integrated Project Delivery. He operated IPD from his home office for the last 26 years. Ted was a strong, faithful, and loving Christian. We could not have asked for a better father. Ted was preceded in death by his loving wife Mariea and is survived by his four children: Von (Aimee), Stephen (Roseann), Victoria, and Andrew; his four grandchildren: Eden, Mariea, Thomas and Tristan; and his life partner, Tura Meyer. He will be laid to rest next to his wife and high school sweetheart in Arcadia, Florida. A viewing for friends and the public will be held at Williams-Thomas Funeral Home Westarea (823 N.W 143rd Street Newberry, FL 32669) from 5:30pm - 7:00pm on Thursday August 19 Burial will be at Joshua Creek Cemetery (4354 SE County Road 760 Arcadia FL) at 1:00pm - Friday August 20th A Celebration of Life will take place at Trinity United Methodist Church (4000 NW 53rd Ave, Gainesville, FL 32653) at 11:00am - Saturday August 21st. Memorial donations may be made to: Sira (local alternative to Planned Parenthood) https://siragainesville.com/ And Ronald McDonald House North Central Florida. https://www.rmhcncf.org/.

Ted Lavon Belser, 67, passed away on August 10, 2021. Ted was born in Arcadia, Florida on October 2, 1953 to Walter Belser and Ruth Mixon. Growing up in a small town, he lived the life of a proud American boy. In high school, he played football... View Obituary & Service Information

The family of Ted Belser created this Life Tributes page to make it easy to share your memories.

Send flowers to the Belser family.