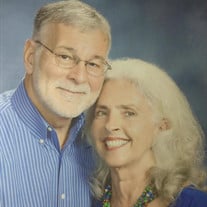 Susan Anne Shields (Fearn) of Jacksonville, FL entered eternal life on November 25, 2021 with her loved ones by her side. Beloved wife to William “Bill” Shields; mother to Bill (Robin), Brian (Cristi), David (Ginger), and Daniel (Christina); grandmother (known as Granny) to Josh, Cody, Skyler, Christopher, Rosa, Caleb, Eliana, Jacob, Gabriel, Kolbe, Javier, Henry, Haley, Ciara, David, Ethan, Jemma, Liam, and Leah; sister to Frank, Donald, Michael and the late Paul Fearn, Jr.; also survived by sisters and brother by marriage, nieces, nephews, cousins and more beloved family members and dear friends. Susan was born on February 1, 1946 to Paul and Delores Fearn and grew up in Mobile, AL. She attended Sacred Heart College in Cullman, AL. There she met Bill, the love of her life, and they were married on May 13, 1969. Eventually, they moved to Jacksonville, FL where they raised their family. Susan and Bill have been parishioners of St. Joseph’s Catholic Church for years. The ministry she and Bill felt most called to was helping married couples grow more deeply devoted to one another and to Jesus. Together they served on Catholic marriage retreats for 38 years. She and Bill were key in creating Diocesan Marriage Renewal and helped to enrich hundreds of marriages. She and Bill helped other marriages outside those who attended the retreats just by their witness of deep love for each other, especially their sons and their wives. One rarely saw Susan without Bill by her side for the 52 years they were married. Most important to Susan was God, Bill and her family and in that order. She put Christ in the center, through prayer and living according to His ways. She knew this was necessary to be the best wife to Bill. And she knew by being a wife who honors God and her husband, she could then be a better mother to her boys, and eventually to her daughters by marriage and then as a grandmother to her grandchildren. She heard in a homily one Sunday that parents need to bless their children often and so with her thumb she began to trace the sign of the cross on her children’s forehead each day. Their home was a busy place with four boys and their friends coming and going, and not to leave friends out she would trace the cross on them too. This took courage as she did not always know how the tracing of the cross would be received. Everyone felt loved after being with Susan. Susan will be greatly missed by Bill, her sons and daughters by marriage, grandchildren and all of her family and friends! We pray that her devotion to Christ, to her spouse, and to the sacrament of marriage will continue to inspire other married couples to put God in the center of their marriage and then live their days for their spouse. We pray that the love she gave to her family, friends, and all those she met will inspire all of us to have the same courage to share our love and faith with others. On Thursday, December 2, there will be a vigil at 1:00 pm and the funeral Mass at 2:00pm at St. Josephs Catholic Church (main church). She will be buried at a later date in a private service at her families’ farm. Let us close with the traveler’s prayer that Susan would say every time anyone left the house in her presence …Sacred Heart of Jesus, keep our wheels round and rolling, motors purring, do not let us harm or be harmed…(Susan added) no fender benders, no crashes, no close calls, healthy happy safe arrival everywhere we go. Amen In lieu of flowers, please have Masses said for Susan Shields. You can call any parish and ask for a Mass said for her or go to the following link and get a Mass said. https://www.thedivinemercy.org/mass/

The family of Susan Shields created this Life Tributes page to make it easy to share your memories.

Send flowers to the Shields family.