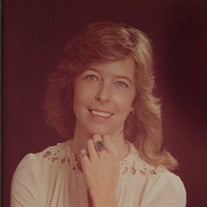 Susan Marie ("Sue) Brower, a 38-year resident of Micanopy, Florida, died on August 1, 2020, at the age of 71. Sue's husband, John Brower, reported her death following a brief illness. Sue was born in Brooklyn, New York, and grew up in a happy family of four sisters and one brother who, with their mother, all adored their father. Because of their father's employment, they lived in Englewood, NJ, Beaumont, TX, and Greenwich, CT, where Sue graduated from St. Mary's High School in Greenwich in 1966. She then graduated at the top of her class from the University of Connecticut in 1970 with a degree in French, having spent her junior year living in France. In the 1970's, Sue moved to Florida where she served as an administrator in a number of medical practices. It was her last position, however, at the Micanopy Animal Hospital that meant so much to her since she loved animals and had a number of different animals on her property for which she provided tender, loving care. It was Sue's spirit and joy of life that so endeared her to those around her. Sue often had a quip or witticism that would lead to laughter, and she had a chuckle that would brighten any day. She loved to dance and sing, and her outgoing nature drew people to her. Her hobbies included painting and sewing, and traveling with her husband, John, to North Carolina where they would go camping. She enjoyed driving her Z car; she was an avid Gator fan and she loved her home in Micanopy. But it was her family that played the most important role in her life; sadly, her beloved son, Matthew Shane Brower, the light of her life, preceded her in death at the age of 26 in 2013. Her stepson, Timothy Loren Brower, also preceded her in death in 2014 at the age of 49. John Brower, a retired Gainesville police officer, loved his wife and devoted himself to making a good life together for the two of them and their sons. Sue's spirit inspired the best in everyone and her loving care made her a most treasured and part in the lives of their grandsons. Joanne Davis, Sue's oldest sister, recalls "watching in awe Sue's courage and independence as off she went to France to study, then off to live in San Francisco, and always to create a life on her terms using her own talents and joyfulness". Sue shared with her one brother, Jay Treu, the ability to make a goofy face that always made people laugh. Jay added that Sue "also loved her Florida Gators, but still always managed to give me a good 01' "Go Dawgs," and loved to rub it in when Florida beat Georgia!" Her younger sister, Janet Wampler, recalls that "Sue never met a stranger. On one occasion, traveling with her siblings to NYC on the subway, Sue entertained those in earshot with a joke that got everyone laughing. She just had that spontaneity and gumption to feel free around everybody." Sue's youngest sister, Mary Andrews, recalls that "when I think of Sue, I think of her as the life of any gathering. I think of her quick sense of humor and wit." However, as Sue's older sister, Diane Oles, observed, "Though Sue faced significant heartaches in her life, she managed to carry on in spite of them, standing proud and tall.” She was preceded in death by her parents, John and Shirley Treu. . She is survived by her devoted husband, Hobart John Edson Brower, her stepson, Chet Brian Brower (Jaime), and four grandchildren: Dalton Wayne Brower, Logan Brian Brower, Tyler Austin Brower and Dustin Ryan Brower. She had 5 siblings: Joanne Davis (Mike), Diane Oles, Janet Wampler (Dan], Mary Andrews (Terry) and Jay Treu (Melinda], all of whom shared a very special relationship with her that endured through the years. A memorial service will he scheduled at a later date. In lieu of flowers, the family asks for donations to be made to the Micanopy First United Methodist Church, P.O. Box 273, Micanopy, FL 32667.

Susan Marie ("Sue) Brower, a 38-year resident of Micanopy, Florida, died on August 1, 2020, at the age of 71. Sue's husband, John Brower, reported her death following a brief illness. Sue was born in Brooklyn, New York, and grew up in a happy... View Obituary & Service Information

The family of Susan Marie "Sue" Brower created this Life Tributes page to make it easy to share your memories.

Send flowers to the Brower family.