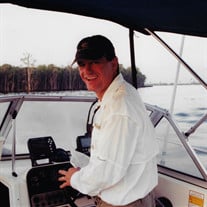 Stephen L. New, DMD, passed away July 19, 2020 at his home in the presence of his wife and daughters after a valiant fight against cancer. Dr. New was born in Atlanta, Ga. On June 21, 1950, to Eleanore and James C. New Jr, the second of two sons. His maternal grandparents were George and Marguerite Adams, and his paternal grandparents were James and Bessie New, all of whom played a major role in his having a fun and carefree childhood. Dr. New’s father was in the air force and was transferred quite a bit during his childhood. Eventually, he was permanently stationed in Orlando, allowing Dr. New to spend most of his childhood in Orlando and its surrounding beaches. Dr. New was always seeking fun and friends, and pre-Disney Orlando provided that opportunity for a flat-top, crew-cut boy. In the sixth grade he was elected to go on an overnight train ride to Washington, D.C. In those days, only two students from each school were selected for the five-day trip. Also, in the summer he graduated from elementary school, he had the dream of his life and made the Little League All Star Team. The team went undefeated until losing in Tampa in the regional finals. What a thrill! Junior high school was much of the same thing, but Dr. New’s attention was turned away from organized sports to surfing and the ocean. However, he maintained his interest in school matters, and did well enough to be selected President of The National Honors Society, which allowed him to attend Mercer University on an academic scholarship. At Mercer, Dr. New excelled, and upon graduation in 1972, he was one of 24 students selected for the University of Florida’s College of Dentistry’s charter class. Upon Graduation in 1976, Dr. New opened his own office in Gainesville, where he practiced for over 44 years. He loved Dentistry and his dental family and patients. He was a member of the American Dental Association, The Florida Dental Association, and the former president of the Alachua County Dental Association. Dr. New’s outside interests included everything related to gator sports, but he especially loved following Gator football, basketball and baseball. His love of the water included water skiing, fishing, boating in The Bahamas, and off shore fishing in the gulf. Dr. New is survived by his wife of 35 years, Patti, and three children Mariah, Ashley and Kailey; brother Jimmy and his two children; three grandchildren, Madison, Jackson and Stella; two sons-in-law, Stuart Henry and Michael Claytor; Brother in law, Frank Smith Jr. and wife Thanawan; Sister in law Janice Then and nephew Alex Then and his wife and two children. Everyone that knew him knew he was one of a kind. In closing, we would like to share the blessing Dr. New recited over all our family meals: May you live every day in paradise, where each day is a holiday, every meal is a picnic and every moment magic. May your years be long and your tears be few. May you learn to weather the storm by dancing in the rain. Dr. New wanted a BIG Celebration of Life which will be held as soon as safely possible. Donations in Dr. New’s honor may be made to the University of Florida’s College of Dentistry at https://dental.ufl.edu/alumni-giving/make-a-gift-online/

Stephen L. New, DMD, passed away July 19, 2020 at his home in the presence of his wife and daughters after a valiant fight against cancer. Dr. New was born in Atlanta, Ga. On June 21, 1950, to Eleanore and James C. New Jr, the second of two... View Obituary & Service Information

The family of Stephen L. New DMD created this Life Tributes page to make it easy to share your memories.

Send flowers to the New family.