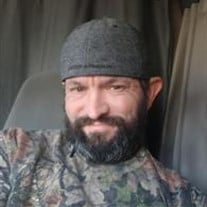 Mr. Stephen Wayne Cowart, Jr., 46, of Hawthorne, Florida, died Thursday, March 18, 2021 at the Putnam Community Medical Center. Mr. Cowart was born in Gainesville, Florida on June 19, 1974 to the late Stephen and Mamie Cowart. He lived much of his life in Hawthorne and had attended the North Baptist Church in Starke. He was a long-distance truck driver, most recently for C & W Trucking. He enjoyed motorcycles and riding four wheelers. He is survived by a son, Stephan Wayne Cowart, III, of Hawthorne; a daughter, Shay Garrison, of Blackshear, GA; a sister, Latonya (Dale) Connelly, of Hawthorne; one grandson, Jackson Andofer; his girlfriend, Laurie Rockenstyre, of Tennessee, along with several aunts, uncles, nieces and nephews. Funeral services will be held on Friday, March 26, 2021 at 12:00 P. M., in the Chapel of Williams-Thomas Funeral Home Hawthorne, 301 South at Lake Avenue. Interment will follow in Conner Cemetery, Starke, Florida.

The family of Stephen Wayne Cowart created this Life Tributes page to make it easy to share your memories.

Send flowers to the Cowart family.