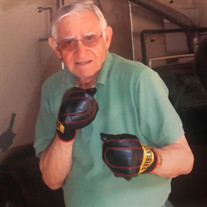 It is with great sadness that we announce the passing of Sol Bleiweis. He passed away peacefully in his Gainesville, Florida home on June 15th, 2020 at the age of 91. Sol was born in Łódź, Poland on December 24th, 1928 to his parents Henry and Esther Bleiweis. Sol was a Holocaust survivor. He was imprisoned in the Łódź ghetto before he was transferred to multiple different Nazi concentration camps, including Aushwitz-Birkenau. He survived the loss of numerous family members, a death march and unimaginable atrocities before he was liberated from Bergen-Belsen. After the war, Sol spent his young adult years traveling Europe pursuing his passion for boxing and soccer. He eventually reunited with his father, who was his only surviving immediate family member. His mother and brother were victims of the Nazi regime. Sol emigrated to the United States and enlisted in the U.S. Army to serve in the Korean War. He was a proud veteran. Sol was a textile engineer and business owner. He lived in New York, New Jersey and California before settling a mile from his son, Mark, and his daughter-in-law Jennifer, in Gainesville. He is survived by his wife of 58 years, Beverly Bleiweis, and his children, Mark, Glenn, Shari, Bonnie, Ted and Lisa. He also is survived by thirteen grandchildren and 5 great-grandchildren. Sol loved watching all sports, hitting the speed bag in his garage and talking politics. Family members describe Sol as “larger than life.” He was an avid storyteller and never met a stranger. His gregarious personality and unending stories were an inspiration not only for his family and friends, but also to students at all levels with whom he shared his life experiences. In lieu of flowers, the family asks that friends make donations to one of the following: the Chabad Jewish Center at the University of Florida or Congregation Bnai Israel, of the Center for Jewish Studies at the University of Florida.

It is with great sadness that we announce the passing of Sol Bleiweis. He passed away peacefully in his Gainesville, Florida home on June 15th, 2020 at the age of 91. Sol was born in &#321;ód&#378;, Poland on December 24th, 1928 to his parents... View Obituary & Service Information

The family of Sol Bleiweis created this Life Tributes page to make it easy to share your memories.

It is with great sadness that we announce the passing of Sol...

Send flowers to the Bleiweis family.