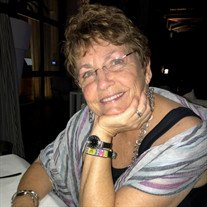 Sherrilyn Diane Pasternak was born March 24, 1944, in Oklahoma City, Oklahoma, the third daughter of T. Norman Evans and Bea Evans. She grew up with her two older sisters, Barbara and Connie, her younger sister, Valerie, and a plethora of collies their family bred and raised. She married young and had two children, Tamara and Jordan, whom she cherished and loved all of her life. Sherrilyn met Michael, the great love of her life at an educators’ conference in 1975 and moved with Tamara and Jordan to Nashville to be with him (her parents thought she was crazy!). On November 12, 1976, they married, and he and his kids, Lisa and Brett, completed her family. This beautiful, loving, boisterous, blended family traveled and played together – picture orange pup tents upgraded to an RV a few years later. And when they traveled by car, there was the inevitable end-of-day question: “Hey kids, do you want to eat cheap or sleep cheap?” Before long, the word “step” disappeared from their vocabulary. Besides Michael and her family, her great loves were being an educator, animals, and travel. Sherrilyn’s teaching passion was special education, and she taught in the schools for several years before getting her doctorate and teaching special ed teachers at Middle Tennessee State University. She and Michael decided to become equestrians shortly after their marriage and subsequently spent three decades raising and showing Arabian horses. There were always plenty of dogs and cats roaming their horse farms in Tennessee, and eventually, the dogs traveled with them when they started spending time in Durango, Colorado to get away from the Tennessee summers, and then the Florida summers after they moved there in 1996. In Gainesville, Sherrilyn trained her dogs as therapy dogs and could often be found in libraries and schools helping kids learn to read. She, Michael, and Tamara also had fun taking agility classes together with their dogs. And then the travel – Europe, Africa, Australia, New Zealand, China, Iceland, Russia, the Baltic countries, Central and South America, the Mediterranean Islands, and all fifty U.S. states. Sherrilyn and Michael rode a motorcycle across the U.S. and Canada, went scuba diving in the great barrier reef, and on safari in Africa. No adventure was too big or too small. As they got a little older, they developed a love of cruising (Disney only, of course) and went on 16 cruises in the past 15 years – including a Caribbean cruise in February of this year! There are a couple of other interesting and fun facts about Sherrilyn. She had an amazing sense of interior design – she redecorated and redesigned one home in Tennessee, two homes in Colorado, and she designed and decorated her home in Florida. She was also the president of Synergy Enterprises – a company formed by her, Michael, and two of their dear friends. They opened the largest chain of sock stores in the U.S. – Socks Galore. The company was extremely successful – both financially and in how they cultivated the creativity and talents of their employees. Sherrilyn leaves behind a legacy of love, humor, adventure, generosity, and devotion. First and foremost, Michael, the great love of her life – their partnership is one for the ages – a model of mutual respect and support as well as lots of play and passion. We should all be so fortunate. Then her four children and their spouses: Tamara and Charles, Lisa and P.A., Jordan and Terri, and Brett and Kerrie. And her ten grandchildren: Alex, Fletcher (Michelle – pregnant with a baby boy), Piper (Nathaniel), Jeremy (Ryan), Ryan (Elissa – children Charlie and Graye), Erica (Mack – children Weston and Sadie), Jasper, Tillie, Kaylie, and Josh (Christy – children Brooklyn, Delainee, Jazmine, RJ, Lexi, and Lynzi). Sherrilyn’s entire family and many, many friends, are better for having her in their lives – her wisdom, her support, her perspective, and her love have forever changed us - we will love and miss her always. In lieu of flowers, please consider a donation to Haven Hospice of Gainesville, FL at https://beyourhaven.org/donate. And instead of a memorial service, Sherrilyn’s family encourages you to gather with your most beloved people and tell them about Sherrilyn and her life and about how she touched yours.

Sherrilyn Diane Pasternak was born March 24, 1944, in Oklahoma City, Oklahoma, the third daughter of T. Norman Evans and Bea Evans. She grew up with her two older sisters, Barbara and Connie, her younger sister, Valerie, and a plethora of collies... View Obituary & Service Information

The family of Sherrilyn Diane Pasternak created this Life Tributes page to make it easy to share your memories.

Send flowers to the Pasternak family.