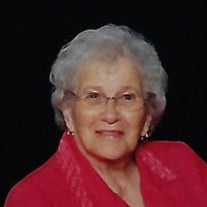 Sara Paulling (Molander) McGuire went to her heavenly home on Thursday, February 3, 2021. Sara was born September 13, 1926, to Henry and Jewel Paulling, in Hawthorne, Florida, where she lived most of her life. In 1950, Sara was married to Roy Molander and they had three children, Simmie, Glenn and Marilyn “Rosebud”. Sara was the epitome of what a mother was meant to be. Her children were the center of her life, and once they were grown and had children of their own, her grandchildren, Glenn Jr., Pam, Kelsey, Harlan, Cecily, and Brendan, filled that spot. In 1981, Sara married Herman McGuire, a match made in heaven! Marrying Herman added members to Sara’s family. Herman brought with him three children, Brenda, Robert and Troy, their children and grandchildren. Sara loved them all dearly. One of the things Sara loved doing most was entertaining and making family and friends feel special. Hosting holiday family dinners was a highlight of her life. She was an incredible cook and always made plenty for everyone not only to enjoy, but enough to send everyone home with a doggie bag. Sara lived a very full and active life. She spent the past several years at Palm Garden. If you went to visit her, you would probably have to hunt her down. She might be playing Bingo, enjoying Mr. October singing, and occasionally she would attend happy hour, only to visit with friends, for the snacks and a soda – no booze. Sara was loved by all who knew her. Sara was preceded in death by her mother and father, her two sisters, Mary and Ernestine, and her husband, Herman. Sara will be missed by those who knew and loved her, including her children, Simmie Molander (Bobbi), Glenn Molander (Susan), and Marilyn Liverman; grandchildren, Glenn Molander, Jr., Pamela Morris, Kelsey Molander, Harlan McGuire, Cecily Cantley, and Brendan Liverman; seven great grandchildren; one great-great grandchild; Herman’s children, Brenda Carr, Robert McGuire, and Troy McGuire (Beverly); their children and grandchildren. Sara is also survived by nieces, nephews, and friends of her children, who she loved like her own. Graveside services will be held at Hawthorne Cemetery on Sunday, February 7, 2021 at 3:00 P. M.. The family will receive friends before the service, beginning at 2:00 P. M. Masks and social distancing are appreciated. For anyone desiring to remember Sara, please feel free to do so in whatever way you are comfortable. If making a contribution, please consider making one in Sara’s honor to the American Diabetes Association, P. O. Box 7023, Merrifield, VA 22166-7023 or online diabetes.org/memorial.

Sara Paulling (Molander) McGuire went to her heavenly home on Thursday, February 3, 2021. Sara was born September 13, 1926, to Henry and Jewel Paulling, in Hawthorne, Florida, where she lived most of her life. In 1950, Sara was married to... View Obituary & Service Information

The family of Sara Paulling (Molander) McGuire created this Life Tributes page to make it easy to share your memories.

Sara Paulling (Molander) McGuire went to her heavenly home on...