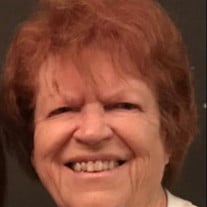 Ruth Sheehan was a caring wife, mother, grandmother, sister, aunt, and friend. She passed away on February 24, 2022, at age 85, surrounded by her children and loving family. Ruth was born on October 31, 1936, in Cambridge, MA, where she was raised and met her husband, Daniel J. Sheehan. She and Dan and their growing family moved to Gainesville, FL in 1966. Ruth was preceded in death by her husband of 62 years, Daniel Joseph Sheehan. Ruth had a deep love for family, and along with her husband Daniel raised 7 children. Ruth’s family was truly the joy of her life. She led with a smile and her heart. She is survived by her 7 children and their spouses and families, which include Dan (Holly) Sheehan, Ed (Donna) Sheehan, Kevin (Elizabeth) Sheehan, Tim (Samatha) Sheehan, Noreen (Joseph) Conn, Brian (Wendy) Sheehan, and Terry (Eleni) Sheehan. She is also survived by numerous grandchildren, great grandchildren, three sisters in laws - Maureen Sheehan-Carney, Patricia Glynn, Nora Watson, and nieces and nephews. Ruth worked as one of the few female underwriters at Florida Farm Bureau for over 20 years until her retirement in 1998. She was an active member of St. Patrick’s Catholic Church for 55 years and volunteered with Catholic Charities in their food pantry. Ruth was also an avid bingo player who laughingly stated that this was much cheaper than therapy. She also enjoyed the occasional road trip to Biloxi. A Mass of Christian Burial will be celebrated Tuesday, March 1st at 11:00 am at St. Patrick’s Catholic Church, 500 NE 16th Avenue, Gainesville, FL 32601. The family will receive friends Monday, February 28, 2022, from 5:00-7:00 p.m. at Williams-Thomas Funeral Home Downtown, 404 North Main Street, Gainesville, FL. In lieu of flowers, the family requests donations be made to St. Jude Children’s Research Hospital, 262 Danny Thomas Place, Memphis, TN 38105. Ruth was a lifelong contributor to this charity because she was so thankful for her healthy children.

Ruth Sheehan was a caring wife, mother, grandmother, sister, aunt, and friend. She passed away on February 24, 2022, at age 85, surrounded by her children and loving family. Ruth was born on October 31, 1936, in Cambridge, MA, where she was... View Obituary & Service Information

The family of Ruth Sheehan created this Life Tributes page to make it easy to share your memories.

Send flowers to the Sheehan family.