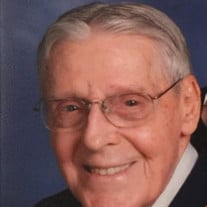 On Thursday, March 3, 2022, Russell W. Furnas, Sr. left this earthly world and into the arms of the Lord at the age of 101. He was born February 8, 1921, in Dayton, Ohio, and died in Gainesville, Florida. He was a longtime resident of Jackson, Michigan, and retired from a long career as a Quality Control Engineer for General Products Corporation. In 1981, he and his pre-deceased wife Luella B. Furnas, retired to Gainesville, Florida where Russell worked as an ESOL teacher at his church, where he met his second wife Lucy Furnas (survives). Russell served our Country in the US Army fighting at the Battle of the Bulge during WWII, earning a Purple Heart for his injuries during that campaign. He often suffered nightmares from his experience during that battle. Russell was an avid trapshooter and enjoyed reading, playing computer games, and learning whatever he could. As a teen and into his early 20s, he was a Michigan State Golden Gloves State Champion multiple times and would later referee boxing matches all over Michigan and volunteer his free time to train other Jackson area boxers. After high school, Russell spent 6 months in Alaska working on a riverboat and at a gold mine. Russell was the father of 8 children – 5 of which survive: Dorothy (deceased infant), Russell Jr., (deceased), Edward A. Furnas, David B. Furnas (wife Debbie), John H. Furnas (wife Theresa), Lawrence A. Furnas (wife Kim), Ruth A. Guthrie (deceased), and Robert E. Furnas (wife Ginny). He is also survived by grandchildren, Lisa Young, Scott Furnas, Audrey Furnas, Jody Furnas Spink, Derrick Frinkle, Ryan Furnas, April Sprunger, Holly Washburn, Heather Furnas Estes, Brandy Furnas Edmonds, Justin Furnas, Danielle Furnas Proughnas, Tyler Furnas, Casey Furnas, Ben Gurthie, Garrett Gurthie, Evan Gurthie, Alex Gurthie, and Virginia Gurthie. Along with his 19 grandchildren, he is survived by numerous great-grandchildren and great-great-grandchildren. He is also survived by a brother Herb (Pat) from Jackson, Michigan along with many nieces and nephews. Two brothers Edgar and Howard are pre-deceased. A funeral service for Russell will be held on Saturday, March 5, 2022, at 11:00 a.m. at St Andrews Church 2715 NW 39th Ave Gainesville, FL. with Bishop Ron Kuykendall officiating. Internment will be on March 7, 2022, at 12:30 P.M. in the Florida National Cemetery in Bushnell, Florida with military honors.

On Thursday, March 3, 2022, Russell W. Furnas, Sr. left this earthly world and into the arms of the Lord at the age of 101. He was born February 8, 1921, in Dayton, Ohio, and died in Gainesville, Florida. He was a longtime resident of Jackson,... View Obituary & Service Information

The family of Russell W. Furnas created this Life Tributes page to make it easy to share your memories.

Send flowers to the Furnas family.