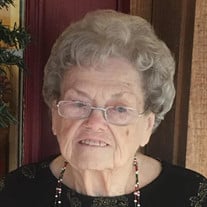 Our beloved mother, grandmother, sister, and friend, Ruby Hanner, passed away peacefully after a short illness at the age of 93 surrounded by family on May 4, 2022 in Gainesville, Florida. Ruby was born in December 1928 in Randolph, North Carolina to the late William & Nora Steed. Ruby spent her childhood years in Greensboro, North Carolina, the youngest of 13 children. She was a star player on the girls’ basketball team in high school. She married her high school sweetheart, Herbert, in July 1947 and the couple moved to Miami shortly after the wedding. Together, they raised 3 children in a house they built. As well as mothering children and tending to the home, Ruby worked as a bookkeeper for an insurance company, Herbert’s Ace Plastering business, and finally Dressel’s Dairy Bar & Farm. In 1973, Ruby and Herbert moved to McIntosh, FL and settled on a farm. Herbert raised cattle and Ruby again helped keep the books before their next big endeavor, helping their youngest son manage and run the Micanopy Meat Market. Ruby was a bargain hunter and frequented local auctions to stock the shelves with treasures for the frequent visitors in the small town. Her many grandchildren took turns spending summers with them in McIntosh. She spoiled them with adventures on the farm and ice cream cones from the store. They learned how to tend to the cows and count change from the cash register. Herbert’s health declined following a stroke and the market was eventually sold. Ruby cared for him at home with his mother until his death in 1989. Ruby, herself, was no stranger to health problems as she was a breast cancer survivor. Ruby was a longtime member of the First Baptist Church in McIntosh, FL. She loved the Lord and was also a lover of books, an avid reader in her free time. She could often be found with a Harlequin romance novel at her bedside or next to her chair or tucked in her purse. After retirement, she enjoyed taking bus tours with her siblings and their families and traveling to sights unseen. If she wasn’t touring the countryside, she could be found in the local bingo halls where she made friends with many of the regulars. Her family fondly remembers her love for puzzle books and Reese’s Peanut Butter Cups. She is survived by her son William “Bill” Hanner (Nancy) of Hawthorne, FL, daughter Betty St. Cin of Micanopy, FL, son James “Jim” Hanner of Greenville, SC, 5 grandchildren (Robin, Danny, Carolyn, Kimberly, and Catherine), 13 great-grandchildren, 1 great-great-grandchild, and her sister Jean Horney of Siler City, NC. She is preceded in death by her parents William & Nora Steed, husband Herbert Hanner, 5 brothers and 6 sisters. Graveside services will be held Thursday, May 12, 2022, at 12:00 noon at McIntosh Cemetery. Family visitation will be at the graveside thirty minutes prior to the service. In lieu of flowers, memorial donations in Ruby’s name can be made to the Breast Cancer Research Foundation.

Our beloved mother, grandmother, sister, and friend, Ruby Hanner, passed away peacefully after a short illness at the age of 93 surrounded by family on May 4, 2022 in Gainesville, Florida. Ruby was born in December 1928 in Randolph, North... View Obituary & Service Information

The family of Ruby Hanner created this Life Tributes page to make it easy to share your memories.

Send flowers to the Hanner family.