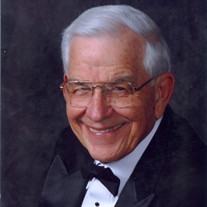 Reverend Roy Yates Jerrell, Jr., 95, passed away peacefully on December 31, 2021, in Gainesville, FL. Roy was born on February 2, 1926, in Oscar, Ballard County, Kentucky to the late Thelma T. (Gregory) Jerrell and Roy Yates Jerrell, Sr. Roy graduated from high school in Cairo, Illinois in 1944 and immediately entered the U.S. Army Air Corp. where he served as a Belly Gunner on a B-24 bomber during World War II. He began his ministry in 1947 and served as lead pastor at six churches across the nation (Texas, Washington, Kentucky, and Florida). His last pastorate was at Northwest Baptist Church in Gainesville, Florida beginning in 1986 where he served for ten and a half years. He retired as Pastor Emeritus. Since retiring from full-time ministry in 1996, he served 14 churches as an interim pastor. He served the Lord for 71 years as a minister with 49 of those as a pastor. Roy graduated with a BA from Shurtleff College in Alton, Illinois in 1950. He also graduated from Southwestern Baptist Theological Seminary with a Bachelor of Divinity, a Master of Religious Education, and a Master of Divinity. In 1980 he received the honor of a Doctor of Ministry degree from Southwest Baptist University in Bolivar, Missouri where he also served on the Board of Trustees. He was preceded in death by his first wife Renabelle Elizabeth (Allison) Jerrell in 1997. He is survived by his wife of 24 years, Iris (Anderson) Jerrell of Gainesville, FL., his three sons, Dr. Greg Jerrell (Connie) of Gainesville, FL., Steven Jerrell, JD, of Arnold, Missouri, and Reverend Dale Jerrell (Cindy) of Weirsdale, FL., his stepson, Bryan Anderson of Tallahassee, FL., 5 grandchildren, Amber Humphries (Jimmy) of Gainesville, FL., Zachary Jerrell (Lindsay) of Savannah, Georgia, Tyler Jerrell of Gainesville, FL., Allison Paul (Brian) of Mt. Grove, Missouri, Aaron Jerrell (Brittany) of Ocala, FL., and 6 great-grandchildren. A celebration of life will be held at 11 am on Saturday, January 8, 2022, at Northwest Baptist Church, Gainesville, FL. The family will receive friends from 10:00 am to 11:00 am. Interment will be at Oscar Baptist Church Cemetery, Ballard County, Kentucky. In lieu of flowers, please make a donation to the charity of your choice.

The family of Rev. Roy Yates Jerrell Jr. created this Life Tributes page to make it easy to share your memories.

Send flowers to the Jerrell family.