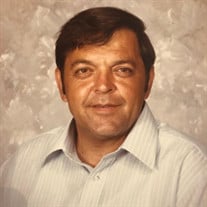 Ronald Abraham Neder, 87, beloved husband, father, father-in-law, grandfather, uncle, brother and friend went to be with the Lord on August 20, 2020. Ronnie was born November 23, 1933 in Jacksonville, Florida. He is survived by his loving wife of 63 years Arlene S. Neder of Gainesville, Florida, and their children – Pam Dudeck of Gainesville, Ronald (Pede) Neder of Gainesville, and Janet Tope (Doug) of Midlothian, Virginia. He leaves four precious grandchildren to cherish his memory – Alex Dudeck of Gainesville, Anna Neder of Gainesville, Lauren Tope of Midlothian, and Austin Tope of Midlothian. Also mourning his passing are his beloved brothers - Dr. George A. Neder Jr. and the Reverend Dr. Charles Neder, his adored niece Cheryl Neder (John Sapora), cousins Bobby and Terrie Neilson, and many other special nephews, nieces, cousins and friends. Preceding him in death are his parents, George and Evelyn Neder, his sister Charlotte Neder, sister-in-law Benita Neder, niece Cynthia Neder Spoto, son-in-law Daniel Dudeck, and nephew Joshua Neder. Ronnie grew up in Jacksonville and graduated from Lee High School in 1951. He attended the University of Florida and played for the Freshman Basketball team. Ronnie joined his brother George as a member of Sigma Chi Fraternity – years later his nephews, Riley, Joey and Ben followed suit. During his sophomore year of college, Ronnie joined the Army and was stationed in Alaska. Ronnie married his sweetheart Arlene on June 9, 1957 and graduated from the University of Florida in 1958 with a Business Degree. Ronnie went to work for US Gypsum and became one of their top sales reps in Louisiana. In 1961, Ronnie returned to Florida and started his own business – Gainesville Hardware and Building Supply. He enjoyed many successful years in the building industry – especially impressive given his own admission that he didn't know one end of a screwdriver from the other. Passionately devoted to the Florida Gators, especially Gator basketball, Ronnie and Arlene hosted the 1970’s Gator basketball team many times. Three very special players, Dr. Tony Miller, Earl Findley and Tim Fletcher, became adopted sons. At a 2019 Gator basketball game, Ronnie was honored for his contributions to the basketball program. Ronnie and his best friend and brother, George, along with their wives, traveled to almost every Gator football game – always first in the stadium so they would not miss a play. Ronnie was a Mason, member of the Gainesville Homebuilders Association, the Quarterback Club and the Lion’s Club. He was a charter member and President of the Gator Touchdown Club and a charter member of the Gator Tipoff Club for basketball boosters. Ronnie was a member of the First Presbyterian Church in Gainesville and became a charter member and Deacon of Christ Community Church. Ronnie embodied hospitality and made everyone he met feel appreciated and valued. A master storyteller, Ronnie could tell epic stories, and some of them were even true. The gift of laughter was one of the many ways he made you feel loved. Quick-witted, warm, humble and always the life of the party, it was customary for him to greet old friends and new friends with, “Hey bubba”, “Hi sugar”, “Hello my darlin’ angel.” Ronnie’s superpower was unconditional love expressed in playful and encouraging ways. No one knew this better than his wife and family, who were the center of his world. He lived for every minute he could spend with them, especially his grandchildren. Ronnie was a very special man, one-of-kind, and will be missed by all those who knew him. There will be a private family graveside service Saturday, August 29th, followed by a celebration of life at a later date to be announced. In lieu of flowers, memorial donations may be made to the E.T. York Hospice Care Center, Gainesville (www.BeYourHaven.org) or the charity of your choice.

Ronald Abraham Neder, 87, beloved husband, father, father-in-law, grandfather, uncle, brother and friend went to be with the Lord on August 20, 2020. Ronnie was born November 23, 1933 in Jacksonville, Florida. He is survived by his loving wife... View Obituary & Service Information

The family of Ronald Abraham Neder created this Life Tributes page to make it easy to share your memories.

Send flowers to the Neder family.