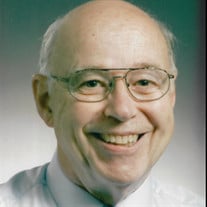 Dr. Ronald Howard Baney, 87, resident of Gainesville, Florida, died Friday, February 14, 2020 in the Plaza Rehabilitation Center, Gainesville, following a long illness. Dr. Baney was born in Alma, Michigan on November 26, 1932 to the late Howard Eugene and Emma Marie Wilson Baney. He graduated from Alma College, where he received his B. S. and then from the University of Wisconsin, where he received his Ph.D. Dr. Baney worked as a research scientist for Dow Corning Corporation, living and working for 6 years in Japan, and was instrumental on working on the heatshields used in the Apollo space missions. He had a wide and varied career, including working on Blood/Brain barriers and working on a stronger hand sanitizer, and received a number of patents on his inventions. He loved to travel, and he and his wife Jean travelled to every continent, camping and animals. Dr. Baney was a member of the Boy Scouts of America, a member of the Young Men of America and in Gainesville, a member of Trinity United Methodist Church, and was active in Kiwanis. Dr. Baney was a Christian and loving Husband, father, grand-father, and great grand-father. He was preceded in death by a son, David Wallace Baney. He is survived by his wife of 64 years Jean Baney; one daughter Ellen Nodine; a twin brother, Raymond John (Marlyn) Baney; two granddaughters, Jean (Mark) Walls and Alicia (Ron) Hall; five great grandchildren Emma “Dylan”, Anna, David, Danella and Lacy. A funeral service will be held on Saturday, February 22, 2020, at 2:00 P. M, in the Chapel of Trinity United Methodist Church, 4000 NW 53rd Avenue, Gainesville, FL, with Dr. Marvin McMillan, officiating. The family will receive friends for one hour prior to the service, beginning at 1:00 P. M. Interment will be in the River View Cemetery, Portland, Oregon. In lieu of flowers, please make donations to the Michael J. Fox Foundation, Post Office Box 5014, Hagerstown, MD 21741.

The family of Dr. Ronald Howard Baney created this Life Tributes page to make it easy to share your memories.

Send flowers to the Baney family.