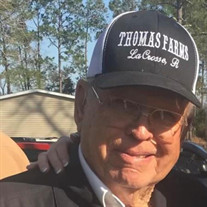 Roland Groover ”R.G.” Thomas age 88 of LaCrosse, Florida passed away January 18, 2021, surrounded by his loving family. He was born June 20, 1932, to Nancy Evelena (Townsend) and G.H. Thomas in LaCrosse. He was the ninth of ten children, 5 boys, and 5 girls. R.G. produced his first pepper crop his senior year of high school in 1950, which was the beginning of a 70-year career of farming in LaCrosse. Along with vegetable crops, he raised beef cattle. His first love of crops was green beans, but he later also grew bell peppers, cucumbers, squash, and sweet corn. He produced, packed, and shipped his crops and those of many neighboring farms at his vegetable packing house in LaCrosse. R.G.’s beloved farm has been designated a, “Century Pioneer Family Farm” is now operated by his son Roland Jeffrey Thomas and his grandson Roland Dylan Thomas. In addition to his parents, and all of his siblings R.G. was preceded in death by his first wife, the children’s mother Sally Merchant Thomas RG is survived by his loving wife of 29 years, Barbara, his daughter Dianna Victoria Vaughn (Steve), daughter Sarah Virginia “Gigi” Howard (Andy), and son Roland Jeffrey Thomas (Kathy). He had a pretty good herd of grandchildren and great-grandchildren, who loved him dearly. R.G. enjoyed fishing in his airboat, golfing with his buddies, and was a lifelong Gator fan. He will be greatly missed by many. R.G. was a member/deacon at the New Hope Primitive Baptist Church, the same church his mother attended. He liked to say he went to church at New Hope before he was born. The family will receive friends on Sunday, January 24, 2021, from 4:00 to 6:00 P.M. at WILLIAMS-THOMAS WESTAREA 823 N.W. 143RD STREET NEWBERRY. Graveside service will be held on Monday, January 25, 2021,12:00 Noon at New Hope Primitive Baptist Church Cemetery. Mask and social distancing will be required. In lieu of flowers, donations can be made to New Hope Primitive Baptist Church, C/O Thomas 3026 West SR 235, Brooker, FL 32622

The family of Roland Groover "R.G." Thomas created this Life Tributes page to make it easy to share your memories.

Send flowers to the Thomas family.