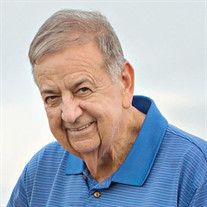 Roger Dale Travis, loving Father and Papa died at age 75, on April 14, 2020. Roger was born on September 8, 1944, in North Carolina to Vernon and Ruby Travis. He received his Bachelor’s of Science Degree in Biology from Campbell University in Buies Creek North Carolina in 1966. He served his country in the U.S. Air Force during Vietnam and was a top pharmaceutical representative for Merck Pharmaceuticals and later Adventis, totaling over 30 years in the industry. On August 22, 1967, he married Rosa Moore Campbell. Together, they raised their two sons, Michael and Brian, and daughter, Gia. They moved to Gainesville in 1974, and have loved this community ever since. Roger’s true passion was his family. When he wasn’t enjoying time with his family, you could find him rooting for the Florida Gators, especially in basketball. He loved studying languages and trivia and coaching youth basketball teams at the Boys Club. His wife, Rosa, started Matchmaker Realty in 1984 and Roger involved himself after retiring by posting quotes on their marquee on Newberry Road for the last 14 years. He will be remembered for his quick wit, his infectious smile, silly jokes, one-liners, ability to make everyone feel comfortable, and his kind, compassionate, and gentle spirit. Roger was preceded in death by his father, Vernon; his mother, Ruby; his sister, Ramona; and his son, Michael. He is survived by his wife of 52 years, Rosa. He is also survived by his two children, Brian Travis and his wife Elle of Huntington Beach, California; Gia Arvin and her husband Scott of Gainesville; his daughter-in-law Allison Travis of Wilmington, North Carolina; his brother Paul Sigmon and his wife Martha of Charlotte, North Carolina; and his grandchildren, Hannah, Jackson, Ruby, Rhett, Lucia, and Avery. We invite you to join us in celebrating the life of Roger Travis on July 18th, 2020 from 4:00-7:00pm at Napolatano’s Restaurant, 606 SW 75th Street Gainesville, Fl 32607. Stop by anytime to have dinner and share your favorite story about Roger. Everyone knows he was huge Gator fan, so please come wearing Orange and Blue in his honor. In lieu of flowers, Roger’s family is asking that you send donations to our local NW Boys and Girls Club of Alachua County at: 2700 NW 51st St Gainesville, FL 32606

Roger Dale Travis, loving Father and Papa died at age 75, on April 14, 2020. Roger was born on September 8, 1944, in North Carolina to Vernon and Ruby Travis. He received his Bachelor&#8217;s of Science Degree in Biology from Campbell University... View Obituary & Service Information

The family of Roger Dale Travis created this Life Tributes page to make it easy to share your memories.

Send flowers to the Travis family.