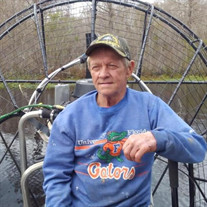 Mr. Robert Samuel “Sammy” Mooney, II, 64, resident of the Hawthorne area, for many years, died at his home in Cross Creek on February 22, 2021. Sammy was born in Decatur, Illinois on June 15, 1956 to the late Robert Frederick and Edna Pauline Mooney. He has lived for many years in the Cross Creek area. Sam was a mechanic by trade, always willing to use his skills to help whoever was in need. When he wasn’t working, he was enjoying boating, fishing and his airboat. He is survived by his daughters, Lura Cody and Andrea Prakhin; one stepson, who he regarded as a son, Gregory Ferraro; his sister, Vicky Cassels; niece, Carla Cassels Miller; nephew, Paul Cassels; four grandchildren, three great grandchildren; four great nieces and nephews and many very close friends, Mary, Gene, Jeff, Phill, Randal and Jerry to name a few. A memorial service will be held on Friday, March 5, 2021 at 11:00 A. M., in the Chapel of Williams-Thomas Funeral Home Hawthorne, 301 South at Lake Avenue with Pastor Charles McSweeney officiating.

The family of Robert Samuel "Sammy" Mooney, II created this Life Tributes page to make it easy to share your memories.