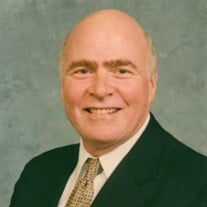 Robert Preston “Bob” Rowe Sr of Heber City, Utah, passed away peacefully on April 30th at the age of 81 in Ocala, Florida, surrounded by his family. Bob was born in 1940 in Wichita, Kansas, to Homer and Louise Rowe. Because of the nature of his father’s work, the family lived in a variety of locations in the South, eventually settling in Atlanta where he attended Marist High School (1958). After graduating from University of Florida in 1962 (Sigma Chi) and University of Georgia law school (1969), he spent his professional life as a highly respected attorney, primarily in Atlanta. He practiced law until the age of 80. Bob spent 4 years in the Marine Corps as a captain and proudly served in the Vietnam War maintaining a life-long friendship with his Marine Corps tent mates. He was an avid fisherman, skilled gardener and natural storyteller. Despite his affiliation with Georgia, he remained an ardent Gator fan throughout his life. In 2014, he moved from Rome, Georgia, to Heber City, Utah, with his wife Jeanie, bringing his daylilies with him. People gravitated to Bob for his wit, easy laugh, compelling stories, Southern style, and positive outlook. He exemplified the phrase “glass is half full” - one in his long repertoire of sayings. At his home in Utah, he enjoyed his neighbors' company and his view of Mt Timpanogos. Bob is predeceased by his wife of 23 years, Jeanie Ogburn Rowe and is survived by his daughter Suzanne Rowe Kirkpatrick, husband Ken and their children, Austin and fiance Dyllan, Preston and wife Lisa, and Laura; son Bob Rowe Jr., wife Angie and their children Colin and Braden; daughter Amy Rowe Hughes, husband Billy and their children Kashi and Somers; sister Carol Dillion and her children Sarah and Russell; son Marty “Beau” Ogburn II, wife Ashley and their daughter Indra; all of whom he loved very much. The family wishes to express its sincere thanks to those neighbors and friends who cared for Bob in Heber City and to the nurses in Ocala whose skill, love and care was a great comfort to Bob and family during his last days. Bob’s special spirit will continue to live on in all who loved him; his daylilies and his home will continue to be lovingly cared for by his family and friends. Condolences can be sent to [email protected] A memorial service will be held in Heber City, UT, on Saturday, July 30th.

Robert Preston &#8220;Bob&#8221; Rowe Sr of Heber City, Utah, passed away peacefully on April 30th at the age of 81 in Ocala, Florida, surrounded by his family. Bob was born in 1940 in Wichita, Kansas, to Homer and Louise Rowe. Because of... View Obituary & Service Information

The family of Robert Preston “Bob” Rowe Sr created this Life Tributes page to make it easy to share your memories.