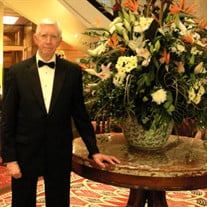 It is with great sadness we announce that Robert Murphy McGehee, 80, passed away suddenly on March 24, 2022, at home in Gainesville, FL. He was born June 17, 1941, to Murphy and Louise McGehee in Birmingham, Alabama. Murphy graduated from Montevallo High School and the University of Montevallo. After college, he attended Cumberland School of Law at Samford University. In 1966, after receiving his Juris Doctor degree, he began a career in the Air Force and attended Officer Training School. During the Vietnam War, he directed military aircraft from a remote mountaintop location in Korea. After this tour, he attended the Air Force Judge Advocate General School and was assigned to Luke AFB near Phoenix Arizona. In Phoenix, he met and married Joyce Higbee from Buffalo NY. In 1975 he was reassigned to Elmendorf AFB near Anchorage, Alaska, where he worked in civil law. In 1979, he transitioned to civilian life and accepted a civil service attorney position in the Washington DC area where he worked with cases for the Air Force until his retirement in 2000. Concurrent with his civilian position, he joined the Air National Guard in 1982 where he worked part-time at the Pentagon and retired as Lieutenant Colonel. During their 48 years of marriage, he and Joyce shared many interests and enjoyed traveling to fascinating destinations, skiing in the winter, sailing on their beloved sailboat “Harmony” on the Chesapeake Bay, and playing with their Siberian Huskies. Through the years they often returned to Florida to attend the McGehee family reunion in Newberry FL. They retired and moved to Gainesville and have enjoyed being closer to the extended McGehee family. Survivors include his wife Joyce, brother Charles (Vicki) McGehee, Nieces Elizabeth (Robert Franklin III, “Trey”) Culpepper, and Vaughan McGehee; Grandnephew Robert Franklin IV “Ford” Culpepper, and Grandniece Annie Culpepper; Sister-in-law Janet (Andrew) McClurg; Brother-in-law James C. (Catherine - deceased) Higbee; Nieces Theresa (Steven) Alverson, Karen (Andrew) Hyland, and Cheryl (Daniel) Rivard; Nephews James R. (Marisa) Higbee, Daniel (Christine) Higbee, many Grandnieces and Grandnephews, and Joyce’s daughter Michelle Lynn Bates (Joe Buckle). Robert Murphy was loved by many McGehee Aunts and Uncles (some deceased now), and multiple generations of McGehee Cousins. He is missed by his faithful Siberian Husky, Shadow. A funeral service will be held on April 11, 2022, at 11 am, at Newberry United Methodist Church, 24845 W Newberry Road, Newberry FL 32669. Interment with military honors will follow at Forest Grove Cemetery, NW 226th St at 78th Av (Rt 232), Alachua FL 32615. In lieu of flowers, donations may be made to the Red Cross or the Newberry United Methodist Church.

It is with great sadness we announce that Robert Murphy McGehee, 80, passed away suddenly on March 24, 2022, at home in Gainesville, FL. He was born June 17, 1941, to Murphy and Louise McGehee in Birmingham, Alabama. Murphy graduated from Montevallo... View Obituary & Service Information

The family of Robert Murphy McGehee created this Life Tributes page to make it easy to share your memories.

It is with great sadness we announce that Robert Murphy McGehee,...

Send flowers to the McGehee family.