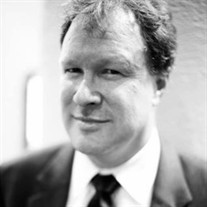 Robert Joseph Hanrahan, Jr. passed away on March 1st at UF Health Shands Hospital after a difficult four-month battle with a MRSA blood infection. He was 56 years old. Robert is survived by his beloved wife, Margie Foster; his mother, Mary Ellen Hanrahan; his sisters, Sheila Hanrahan Gibson (husband, Tom) and Pegeen Hanrahan (husband, Tony Malone); his brother-in-law, David Prince; his nephews, Matthew Hanrahan (wife, Jamie), James Gibson (wife, Brittany), and Quinn Malone; and his nieces Grace Gibson, Evy Malone, and Tess Malone. Robert also has many aunts, uncles, and cousins left to cherish his memory. He was predeceased by his father, Dr. Robert Joseph Hanrahan, just six months previously and by his eldest sister, Ann Marie Hanrahan, who passed in March 2017. Robert was born on April 21, 1965 at Alachua General Hospital. He was a welcomed family addition and doted upon by his two older sisters, Ann Marie and Sheila. His younger sister Pegeen arrived just 15 months later. As a child, Robert was a quintessential rough and tumble Florida boy who remained forever hopeful of finding just that one shark’s tooth in the Hogtown Creek. He attended public school at Glen Springs, Littlewood, Westwood, and Buchholz, graduating a year early in 1982 to start college at the University of Florida (UF). He earned bachelor’s and master’s degrees in nuclear engineering and a doctorate in materials science engineering with a focus on metallurgy. Upon graduating UF, he worked for many years as a researcher at the Los Alamos National Laboratory in New Mexico, and then moved to the Washington, DC, area to take a position at the Nuclear National Security Administration (NNSA) at the U.S. Department of Energy (USDOE). He completed his career with responsibilities as Chief Science Advisor at the NNSA USDOE, providing input on much of our nation’s most sensitive work on nuclear security. He had among the highest security clearances; acted as a liaison to The Jasons, a prestigious and elite group of scientists; and always took his responsibilities extremely seriously. However, Robert never let the gravity of his work impede his mood. His motto in life was always “be peaceful and enjoy this moment.” Among his many professional accomplishments, he co-edited a six-volume text book on plutonium and published 75 peer-reviewed articles and numerous magazine stories. In 2010, he completed a law degree at George Mason University and was later admitted to the Maryland Bar. A true renaissance man, Robert’s interests and expertise were incredibly diverse. At the age of 14, he bought his first Volkswagen Bug with its engine in the back seat and rebuilt it himself. Over the years, Robert collected and restored numerous Volkswagens and Porsches. He also loved and collected other colorful and fun antiques and mechanical artifacts, including pinball machines, Coke machines, tiki-related memorabilia, books, albums, Hawaiian shirts, mid-century modern décor, and on and on. While at UF, Robert was the front man singer for a punk band called “Butter the Heifer,” which played many a raucous gig. His diverse circle of friends spanned multiple states, and he was known for helping anyone who was on hard times, even housing more than a few as an act of pure kindness. Robert met his wife Margie in downtown Gainesville following his 25th high school reunion in 2007. To say she was the light of his life is an understatement. He adored Margie and together they traveled, collected, raised their dogs, Bear and Panda, and their tortoise, Baby, and generally filled one another’s lives with fun, play, and adventure. In his last days, Margie advocated heroically for any medical care that would give hope for survival, including transporting him from Gaithersburg, Maryland, to Gainesville, Florida, where he received extraordinary care at UF Health Shands Hospital. Robert was well loved by his wife, his family, coworkers, and friends, as demonstrated by the many deeply moving stories, testimonials, and words of appreciation received by his family. There will be a funeral mass at Holy Faith Catholic Church on Saturday, March 19th at 1:30 PM, followed by a reception. Those who are unable to attend in person are invited to attend the services remotely using the following online link: https://youtu.be/dkQdzuRTVZU. The recorded event will also be available at the same link after the services. The family requests that in lieu of flowers, donations be made to the charity of your choice or to the Alachua County Education Foundation in honor of the great education that Robert and his sisters received through Gainesville’s public school system.

The family of Robert Joseph Hanrahan, Jr. created this Life Tributes page to make it easy to share your memories.