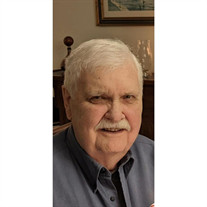 Dr. Robert (Bob) Louis Degner of Gainesville, Florida died February 24, 2022 following a brief illness. He was 80. Private funeral services will be provided by Williams-Thomas funeral home and burial will take place at Forest Meadows Cemetery in Gainesville, Florida. He was born January 20, 1942 in Malone, Texas to Louis William Degner and Frances Olga Strauch Degner. He earned three degrees, including a doctorate degree, from Texas A&M University. He began his career at the University of Florida in Gainesville in 1976 where he held a faculty professor position and served as the director of the Florida Agricultural Market Research Center from 1982 until his retirement, when he earned the title of Professor Emeritus. He and his wife, Janet, had been married for 45 years. His interests included antique cars, woodworking, guitars, and music. Survivors include: sisters, Doris (Mike) Pettit of Texarkana, Texas, Joyce Maddox of Dawson, Texas, and Sandy (Ronnie) Perry of Clarksville, Arkansas; wife Janet Dunphy Degner of Gainesville, Florida; son Clint (Sarah) Degner of Rockwall, Texas, daughter Kelly (Camilo) Degner Calvo of Marietta, Georgia, son Travis (Vanessa) Degner of Austin, Texas, six grandchildren, three great grandchildren, and many nieces and nephews. He was preceded in death by his son, Clifford (Rosemary) Degner of Caldwell, Texas. In lieu of flowers, donations may be made in Robert Degner’s name to The Multiple Sclerosis Center of Atlanta. The Multiple Sclerosis Center of Atlanta 3200 Downwood Circle NW, Suite 550 Atlanta, Georgia 30327 404-351-0205 www.mscatl.org Eulogy for Robert Louis Degner The Day the Music Died Robert Louis Degner, or as many knew him, Bob, was born at the family home in Malone, Texas, the first child and only son of Louis and Frances Degner. He and his three sisters grew up in the small farming community, surrounded by many aunts, uncles, and cousins. His aspirations extended beyond farming, however, and he attended Texas A&M University where he earned a PhD in Agricultural Economics. He had a successful career as a professor at the University of Florida in Gainesville, where he raised his family with his wife of 45 years. He enjoyed attending Gator baseball games as a season ticket holder and spending time with his family. His interests included antique cars, woodworking, guitars, and music. For those who knew him and loved him, the day he passed was “The Day the Music Died.” Dad was the music of our family. His personality had no genre, despite his country roots, and the rhythm of his life was steady and unhurried. He was humble and unassuming, thoughtful and generous, although with the occasional humorous and witty crescendos. One thing is certain, that the music in him was genuine, unique, and from the heart. It came through in everything he did. It showed in his passion for learning, his desire to try new things, and his inquisitive nature. His interests were wide and varied, his curiosity boundless, and his enthusiasm infectious. He could talk for hours about food, guitars, and guns, to name a few. He was multi-faceted, even well-rounded (in a couple of ways). At times his traits seemed at odds with one another: Gentle yet tough. Dynamically creative while being meticulously analytical. Grouchy yet loving. He was always true to himself and encouraged us to do the same, and to find our own music within us. To have and express our opinions, to care for and respect others, and to value determination and hard work. He loved his family beyond measure and had faith in God that was an example to others. Life will be a little quieter without him around. We will miss his love, support, curmudgeonly ways, and his laugh. We will see him again, and until then, we know that he is in heaven, picking and grinning, watching us all carry his music and his memory in our hearts.

The family of Dr. Robert "Bob" Louis Degner created this Life Tributes page to make it easy to share your memories.

Send flowers to the Degner family.