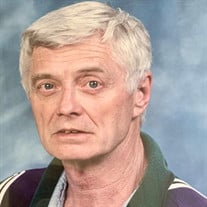 Robert Edwin Correll, 84, of Gainesville, FL died Tuesday, June 1, 2021, following a long battle with Alzheimer’s disease. Robert was born September 9, 1936, in Waterbury, New Haven, Connecticut to Edwin H. Correll and Mary Elizabeth (Elsie) Foley Correll. He earned a Master of Engineering degree from the University of Connecticut and Master of Business degree from the University of New Haven. Robert proudly served our country in the United States Army. He enjoyed a fascinating career. In the field of Unimation, he introduced the first industrial robots to the USA. He worked with General Electric as a Robotic software tester and later for the Battelle Institute as a Senior Engineer. After 9/ll Robert supported TSA Explosives Detection Technology and training in USA airports. Robert had many hobbies and interests which included the Miata Car Club, Model Train Club, Jeep Club, flying, piano and clavinova, travel, camping, and singing. Robert was of the Catholic faith. He was a faithful member of St. John the Beloved Catholic Church in Summerville, South Carolina where he served with the Knights of Columbus, was a Choir Member, was on the Building Committee, and was a Eucharistic Minister. Upon relocating to Gainesville, his membership transferred to Queen of Peace Catholic Church. Robert was preceded in death by his parents and his brother, Raymond George Correll. He is survived by his beloved wife of 59 years, Joan Fleming Correll, his children and their spouses, Joseph T. Correll (Michael Bouson) Melissa J. Lilley (David Lilley) Angela L. Giarrusso (Roy Giarrusso) and Melanie J. Correll (Fred Souret) and his grandchildren, Michael, John, Alexander, and Jessica Giarrusso, Brock, Meredith, and Jack Lilley, and Andre' and Patrick Souret. A Mass of Christian Burial will be held Saturday, September 11, 2021, at 10:00 AM at Queen of Peace Catholic Church, 10900 SW 24th Ave. with Fr. Al Esposito as celebrant. In lieu of flowers, please consider a donation in Robert’s memory to the Alzheimer’s Association at www.alz.org.

The family of Robert Edwin Correll created this Life Tributes page to make it easy to share your memories.

Send flowers to the Correll family.