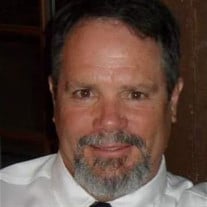 Robert (Bob) Demara, age 67, passed away on August 28th, 2020 after peacefully letting go in his battle with cancer. Though his fight was long and courageous, Bob will be remembered not by his illness, but as a loving and devoted husband, father, son, brother, neighbor, doting dog-Dad, seafood chef extraordinaire, Halloween enthusiast, avid golfer and skier, teller of perfectly-timed "Dad jokes", backyard MacGyver, expert party planner, and an unwavering light in the lives of anyone that knew him. Bob's life is celebrated and survived by his beloved wife, Carol Dunbar, of Inglis, FL; daughters Kimberly Demara, Kristen Kelo, Kaylyn Moran and Kelsey Demara of Preston, CT; sisters Cheryl Demara of Noank, CT, Janice Lewis of East Lyme, CT, and Karen Bourque of Groton, CT; five adored grandchildren: William, Lilliana, Paisley, Weston, Kinsley, and another on the way; several nieces and nephews, many friends whom he considered family, and his four-legged companions, Scout and PJ. He is preceded in death by his father, Paul Demara and his mother, Marilyn (McIntyre) Demara, of Groton, CT. Bob was born on the first of May, 1953 in New London, CT, to parents Paul and Marilyn. A bright and inquisitive child, Bob, Bobby, or "Baby Puddin" as he was lovingly called by his mother, was an Eagle Scout, swimmer, and excelled at playing every type of saxophone in his reach. He graduated from Fitch High School in 1971 and went on to graduate from UCONN with a degree in Business in 1974. Shortly thereafter, he moved to Virginia where he worked for Navy contractors and later accepted a position at Tracor Inc. in Groton, CT as a software analyst. He finished his career at Electric Boat General Dynamics in Groton where he made lifelong friends and met his wife, Carol. Bob was a very, social, active man who was involved in many groups and activities throughout his life, including various ski, golf and softball clubs, where he set a new record for the number of times one person can break their nose. He also was a beloved member of the Westerly Yacht Club for several years, not as a helmsman, but as a staple at the deep fryer for all the summer parties where he served up the best clam fritters in New England. A true lover of life, Bob enjoyed tropical excursions with his wife, Carol; gardening and sharing his harvest with friends and neighbors; his cherished annual "Man Weekend" in New Hampshire spent with his Preston buddies; Thursday night concerts at Esker Point Beach for which he could never be too early to get the best spot; and theme parks; particularly experienced from the front seat of the fastest and tallest roller coaster in the park. When time didn't allow for a trip to Kings Dominion or Six Flags, Bob would simply turn his own backyard into an amusement park, complete with homemade zip lines, snow-tubing jumps, and waterslides. Family and friends eagerly anticipated his famous Halloween parties in which he'd transform his home into an impressive haunted house, full of wood chips, hay bales and smoke machines, with no detail left out. Bob will be remembered as an epitome of fun and life lived to its fullest; against all odds and with nothing held back. A celebration of life will be held in the fall, in which all will be welcome to attend and celebrate Bob's life. The family would like to thank Bob's friends and loved ones who have offered their support as we honor and celebrate a life most excellently lived.

Robert (Bob) Demara, age 67, passed away on August 28th, 2020 after peacefully letting go in his battle with cancer. Though his fight was long and courageous, Bob will be remembered not by his illness, but as a loving and devoted husband, father,... View Obituary & Service Information

The family of Robert "Bob" Demara created this Life Tributes page to make it easy to share your memories.

Send flowers to the Demara family.