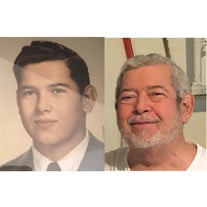 Richard Elwood, passed away on January 5, 2022, in Orlando, Florida at Advent Health East Hospital at the young age of 77. He was born July 10, 1944 in Miami, Florida. Richard, who fondly went by as “Dick or Dickie” was a fervent believer in Jesus Christ and a dedicated supporter of the ministry of his teachings. He was known for his giving spirit by most, but surely of his blessed singing voice. In his younger years, he shared his talent when given the opportunity to sing gospel music with his musically talented brothers and sisters. Richard was a great animal lover, which he enjoyed with the company of many of his chihuahuas and cats over the years. He was also a loving and purposed father of two boys, and grandfather of many grand and great-grandchildren, which he cherished dearly. Richard was a true Florida native and avid Gator fan who initially worked for the City of Gainesville, then transferred to the State of Florida Department of Corrections where he retired after 26 years of faithful and loyal service. Richard is survived by his wife, Mary Anne Elwood (Sell) of Orlando, his son Jeffrey Thomas Elwood (wife-Elizabeth), his grandchildren Kimberly, Sarah, Joshua, Abigail, and three great-grandchildren. He was preceded in death by his parents Stephen Churchill Elwood and Helen Ruth Elwood (Curry) and his firstborn son Richard Timothy Elwood. In lieu of flowers or gifts, memorials or donations may be made to St. Judes Children Hospital or to local Animal Shelters in his memory. For correspondence and mailings, please send to P.O. Box 881838, Port St. Lucie, Florida 34988.

The family of RICHARD THOMAS ELWOOD created this Life Tributes page to make it easy to share your memories.

Send flowers to the ELWOOD family.