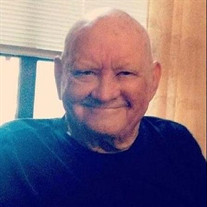 Richard Samuel Hurlston, Sr., passed away peacefully Sunday, March 28, 2021 at Ayers Health and Rehabilitation Center in Trenton. Richard was born August 22, 1930 in Dayton, Ohio to William Thomas Hurlston and Trilby Foster Hurlston. After growing up in St. Petersburg, he spent most of his life in Trenton, Florida, and resided at Ayers for the past 3 years. Richard worked for the St. Petersburg Fire Department, the Florida Department of Agriculture Inspection Station, the Gilchrist County Sheriff’s Department, and the Florida Department of Corrections. As a young man, he also worked as a roofer and was enlisted in the Coast Guard. He was a long-time member of Bethel Baptist Church, serving as a deacon, Sunday school director and choir member. Richard married Imogene Sanders Hurlston on June 20, 1954. They were inseparable for 65 years, even sharing a room in the nursing home, until her death in February of 2019. Richard was also preceded in death by a daughter, Karen Hurlston Willis. Richard is survived by his son, Buddy Hurlston (Emily), daughter, Lyn Tomlinson (Todd); eight grandchildren: Kerry Willis, Ricky Biss, Michael Biss (Sarah), Tyler Biss (Kat), Samuel Hurlston, Hannah Cherena (Jacob), Tabitha Vonesh (Ryan), and Naomi Lauderbaugh (John); thirteen great-grandchildren (and one on the way); his sister, Sharon Twigg (Merl); and a host of nieces and nephews. Funeral services will be held on Wednesday, March 31 at 11 am at Bethel Baptist Church, 7070 SW CR 334A, Trenton. The family will receive friends for one hour prior, beginning at 10 am, at the church.

The family of Richard Samuel Hurlston Sr. created this Life Tributes page to make it easy to share your memories.

Send flowers to the Hurlston family.