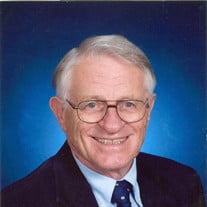 Richard (Dick) Joseph Libby slipped the surly bonds of earth to touch the face of God on Wednesday, February 2, 2021. Dick was born September 12, 1931, to Dorothy Hachey, in Waterville, Maine. In 1954, Dick was married to Lois Rendell and they had four children, Glory, Gary, Mark, and Julie. In 1982, Dick married Kathryn (Kay), his “fweetheart” of 38 years! Marrying Kay added her son Jeff to Dick’s family. Together they lived in Melbourne Village, Florida. Dick was a proud Veteran of the Korean Conflict. After his stint in the United States Army, Dick worked for RCA and eventually GE as a Chief Radar Technician tracking space launches from Cape Canaveral and the Kennedy Space Center. He never saw a live space shuttle launch or any space launch for that matter until after he retired in 1990. After retirement, Kay and Dick relocated to Blairsville, Georgia, where he mastered his skills as a woodworker and carpenter, spending much of his time in the shop behind a wood lathe creating ornaments, trinkets, furniture, and bowls from every type of wood imaginable. Dick never met a log he did not like. Aside from woodworking, he tried his hand in a large variety of hobbies including roller skating, painting, piano playing, banjo playing, instrument making (he made a dulcimer), stained glass work, and so much more. Dick lived a very full and active life. He volunteered with the Knights of Columbus in his church and liked to visit the Home Depot with donuts for the associates as he eyed some new tools. He spent the past few years at Palm Garden of Gainesville, FL. If you went to visit him, you could just listen for his trademark “honk, honk, beep, beep” as he came down the halls. Dick was loved by all who knew him. The family would like to thank the nurses and staff at Palm Garden and Haven Hospice for their loving care of Dick. Dick was preceded in death by his mother and son, Gary. Dick is survived by his wife Kay and his children, Glory Fertally (Scott), Mark Libby (Anne), Julie Todd and Jeff Malloy (Samantha); grandchildren, Aaron and Kim Goedl, Chris and Mark Fertally, Michael Libby, Brittany, and Kiley Bechtel, and Emily Malloy; great-grandchildren Shyanne, Simone and Olivia Goedl, Charli and Jakobi Libby. Dick will be missed by those who knew and loved him and particularly by his grandchildren who affectionately referred to him as G-pa. A Mass of Christian Burial will be held at Queen of Peace Catholic Community in Gainesville, FL on Saturday, February 27, 2021, at 10 A.M. with Fr. Joseph Marialal as celebrant. Graveside services will be held at Maple Grove Cemetery in Vermilion, Ohio, at a later date. For anyone desiring to remember Dick, please feel free to do so in whatever way you are comfortable. If making a contribution, please consider making one in Dick’s honor to the Knights of Columbus Council 11746 at St. Francis of Assisi, 3717 HWY 515E – Blairsville, GA 30512.

Richard (Dick) Joseph Libby slipped the surly bonds of earth to touch the face of God on Wednesday, February 2, 2021. Dick was born September 12, 1931, to Dorothy Hachey, in Waterville, Maine. In 1954, Dick was married to Lois Rendell and they... View Obituary & Service Information

The family of Richard "Dick" Joseph Libby created this Life Tributes page to make it easy to share your memories.

Send flowers to the Libby family.