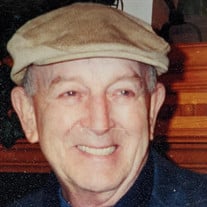 Richard J. “Dick” Benoit, 88, of Gainesville, FL passed away peacefully on Wednesday, August 25, 2021, after a courageous battle with Alzheimer’s and breakthrough Covid. Dick is survived by his loving wife of 68 years, Jo Ann who faithfully assisted him during his later years. He was born in Jamestown, NY in 1933 to Lemier A. Benoit and Mary E. McAvoy Benoit, the oldest of three children. He was predeceased by his parents and his sisters Catherine Corkery and Sister Joan Benoit. Dick is survived by his wife Jo Ann Benoit, sons Stephen Benoit (Mary), Horseshoe Beach, FL and Franklin, AR and Andrew “Toby” Benoit (Shirley), Jacksonville, FL, grandchildren Kelsey Cano (Orlando), Jeff Benoit, Jason Benoit, and Matt Landschoot (Danielle), and four great-grandchildren, Logan Cano, Lily Cano, Coralyn Landschoot and Brynlee Landschoot. He is also survived by brother-in-law Roger Johnson of Milpitas, CA, and Chautauqua Lake, NY, and numerous nieces and nephews. Dick graduated from Jamestown, NY High School in 1950 where he met the love of his life, Jo Ann Johnson. They married in 1953 and he went on to graduate from Jamestown Community College and earned a Bachelors's and Master’s Degree in Education from the State University of NY at Fredonia. During and after raising a family, he earned a Doctorate in Education from the University of Florida in 1978. Dick was a lifelong educator and moved his family from New York to Melbourne, FL in 1960 to teach at the area Junior and Senior High Schools during the Space Coast’s boom surrounding the early years of the NASA space program. In 1965 they moved to Chicago, IL so that Dick could attend Northwestern University under a one-year John Hay Fellowship award leading to his Master’s Degree completion. In 1966, Dick returned his family to Florida and settled in Jacksonville where he began teaching at Florida Junior College during the initial years of that college’s inception. In 1969 he moved his family to Gainesville and began a career teaching at Santa Fe Community College that lasted 30 years. Dick, who was always a patron of the arts, served as, at Santa Fe, a Humanities instructor, Dean of the Arts and Letters Department, and as Assistant to the President. In 1970 he served on the committee that helped establish the first Santa Fe Community College Spring Arts Festival. He enjoyed telling the story of holding committee meetings in their living room since the old Thomas Center Hotel Campus was not air-conditioned at the time. 'While at Santa Fe, he established many lasting friendships with his colleagues.' Dick loved to travel and he and Jo Ann visited Europe many times during the 1980s and 1990s taking pictures and accumulating photographic slides of the art, architecture, and history of the regions they visited. Upon retiring they crisscrossed this country in a travel van visiting friends and family and exploring the great outdoors. Dick enjoyed spending time with his family and took particular pride in his grandchildren. He was an avid Gator and attended hundreds of football, basketball, and baseball games over the years. He also loved to read and enjoyed watching shows on PBS. Jo Ann and family wish to express a special thank you to the staff of the Windsor Assisted Living facility and a very special thank you to daughters-in-law Mary Benoit and Shirley Benoit for their kind assistance over the recent years. The family will hold a private memorial service at a later time. In lieu of flowers, the family requests that donations may be made to the Florida Alzheimer’s Association. www.alz.org

The family of Richard "Dick" J. Benoit created this Life Tributes page to make it easy to share your memories.

Send flowers to the Benoit family.