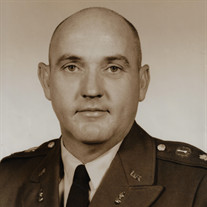 Lt Col. Rhesa B. Bostick, U. S. Army, Retired, 90, of Gainesville, Florida, died Thursday, September 10, 2020 in the Haven Hospice E. T. York Care Center, following a long illness. Lt Col. Bostick was born in Gainesville, Florida on July 23, 1930 to the late Samuel and Lilly Bostick. He attended and graduated from P. K. Yonge, a “lifer” and played on the schools 6-man football team. Following graduation, he attended the University of Florida, before joining the U. S. Army and going to Officer Candidate School. Lt Col. Bostick had a long career in the Army, receiving many awards, including the Meritorious Service Award, serving on bases all over the world; from bases in the U. S. to Germany to Japan and finally retiring in 1970. He moved home to Gainesville and began a long career as a loan officer for Guarantee Federal Bank. He was a lifelong member and Elder of the First Presbyterian Church of Gainesville; he loved to hunt and fish. He was preceded in death by a son, Steven Robert Bostick, Sr., by a granddaughter, Dawn Monroe and a brother, Wilcox Bostick. He is survived by his wife of 69 years, Marilyn Bostick; one daughter, Becky Robinson; six grandchildren, Nathaniel McKnight, Ashly Robinson, Latifah Robinson, Amandaa Bostick-Brewer, Steven Robert Bostick, Jr. and Isaac Bostick; six great grandchildren Paisley Brewer, T. J. Monroe, Jr., Sydney Monroe, Trey Monroe, Abriyah Robinson, and Jezell Foreman, along with five great-great grandchildren. The family will have private service for Lt. Col. Bostick.

The family of Rhesa B Bostick created this Life Tributes page to make it easy to share your memories.

Send flowers to the Bostick family.