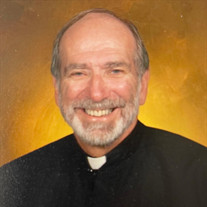 Reverend Father Nikitas J. Theodosion reposed peacefully in the Lord on Thursday, February 3, 2022, surrounded by his family. He was born in Cleveland Ohio to John and Margaret Theodosion on April 13, 1938. Growing up in Richmond Heights Ohio, he enjoyed fishing, sports, clambakes and family parties where he would play clarinet with his father who played bouzouki and brother who played guitar along with his uncles, while the family and guests danced. He also loved classical music and studied in college to play classical clarinet. After finishing college, he taught elementary school, and did sales and marketing for Rotor Tool Corporation, and Otis Elevator. He also played in a Greek band called the Three Drachmes that played for weddings and baptisms. Father Nick used his musical ability to serve the church as a choir director at Saint Demetrios Greek Orthodox Church of Rocky River Ohio in the 1950’s and 60’s and at Saints Constantine and Helen Greek Orthodox Church of Cleveland Heights Ohio, in the 70’s and 80’s. In 1962 he met his wife of 59 years, Mary Vourlogianes, and they were married in June of 1963. Together they had two sons John and Constantine. In 1976 Father Nick decided to buy a PIP Printing store which he owned and operated for approximately 15 years. After his son John finished seminary, he followed his son’s footsteps and went to Holy Cross School of Theology in 1992. After finishing seminary, he was ordained to the priesthood and served the communities of Annunciation in Columbus Ohio, Holy Trinity in Saint Augustine Florida and Saint Elizabeth the Wonderworker in Gainesville Florida. He was particularly pleased to have been the presiding priest when Holy Trinity built their new church edifice and when Saint Elizabeth was consecrated. However, nothing pleased him more than spending time with his family, friends and parishioners whom he loved so much. He had a gentle and quiet way of spiritually guiding, challenging and advising those in his care. He is loved by many and will be missed very much. Father Nikitas J. Theodosion is survived by his wife Presbytera Mary Theodosion, Son Father John (Presbytera Athena) Theodosion, Son Constantine (Alina) Theodosion, six grandchildren, Vasilia, Alexandra, Nicholas (a.k.a. Nikitas), Joseph, Andreas and Anthony. He is also survived by his two siblings Mike (Estelle) Theodosion and Melanie Linderman, and his beloved nieces and nephews. A viewing will be held Wednesday, February 9, 2022 from 4:00 -7:00 p.m. (Trisagion at 6:00 p.m.) at St. Elizabeth Greek Orthodox Church, followed by light refreshments at the parish house community room. Thursday, February 10, 2022 at 10:00 a.m: Divine Liturgy served by Fr. John Theodosion, at St Elizabeth Church, followed by light refreshments at the parish house community room. The funeral service will begin at 12:00 p.m. Burial will follow at the Greek Orthodox Cemetery at Countryside Baptist Church, 10926 NW 39th Ave., Gainesville. Return to St. Elizabeth Church for traditional Makaria (Mercy Meal) at the parish house community room. All Are Invited. The service can be live streamed through the facebook page of St. Elizabeth. In lieu of flowers, donations may be made to St. Elizabeth Greek Orthodox Church, 5129 NW 53rd Ave, Gainesville, FL 32653.

Reverend Father Nikitas J. Theodosion reposed peacefully in the Lord on Thursday, February 3, 2022, surrounded by his family. He was born in Cleveland Ohio to John and Margaret Theodosion on April 13, 1938. Growing up in Richmond Heights Ohio,... View Obituary & Service Information

The family of Rev. Fr. Nikitas J. Theodosion created this Life Tributes page to make it easy to share your memories.

Send flowers to the Theodosion family.