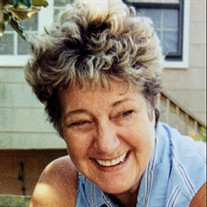 Raye S. Moulthrop, 80, longtime resident of Gainesville, Florida, died Monday, March 8, 2021 at her home, following a long illness. Mrs. Moulthrop was born on April 1, 1940 in Ft. Myers, Florida to the late Ray and Ola Mae Slade. She grew up in Atlanta, Georgia, attended college at University of Georgia, and married Dr. James Irwin Moulthrop, Sr., a U.S. Department of Agriculture foreign service officer, She then began a life of travelling and raising her family in duty stations all around the world; wherever she called home, from Rome, Washington, D. C, Mexico City and Kuala Lumpur, her focus was on her family, from Boy and Girl Scouts to PTA, she was happiest when doing activities with her family. After their retirement, Raye and Jim made their home in Gainesville where she was a member of the Servants of Christ Anglican Church. She is survived by her husband of nearly 60 years, Dr. James Irwin Moulthrop, Sr.; one son, James I. Jr. (Eileen) Moulthrop, of California; two daughters, Kimberly Moulthrop (Juan Carlos) Phillips, of Virginia Beach, VA, and Pamela Moulthrop (Lorne) Davidson, of` Lovettsville, VA; and her six grandchildren, Morgan, Brooklynne, Jackson, Kevin, Dylan and Liv. A memorial service celebrating her life will be held at a later date. Memorial donations in her name may be made to the Servants of Christ Anglican Church, Building Fund, 3530 NW 8th Ave., Gainesville, FL 32605.

The family of Raye S. Moulthrop created this Life Tributes page to make it easy to share your memories.

Send flowers to the Moulthrop family.