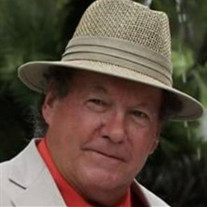 Ralph "Roc" Pridemore Chick, 67, passed away at 4:20pm Thursday, October 21, 2021 at Halifax Health Medical Center surrounded by his Loving Family. Roc was born October 24th, 1953, in Pompano Beach, Fl. He graduated from Pompano Beach High School in 1971. He left there in 1989 to follow his brother Bill to Gainesville, Fl to help run his bar that we've all come to Know and Love "BALLS". For the last 32 years Roc became well known and loved by many in his town, being dubbed “The Mayor of Midtown”. His contagious smile, gregariousness, and love for life would leave an impression on people that will last a lifetime. After retiring in 2016 he traveled to Cuba, Costa Rica, and most recently Brazil. He was enjoying spending time with the ones he loved, making new memories and continuing to live life to the fullest. They say Heroes are Remembered but LEGENDS never die, and Roc Chick will continue to Live in the hearts of All of Us. Roc is survived by his son, Cade Chick and daughter-in-law Delanie; grandchildren, Aria and Canon Chick; mother, Barbara Chick; siblings: Russ and Stacy Chick; nieces and nephews, Casey, Jacey, Jessica, Mike, Chelsea, Chantz, Cassidy and Jack; great nieces and nephews, Jayse, Jax, Jaely, Layla, Lily, Robert and Chick. Preceded in death by his father: William Chick and beloved brothers, Bill and Jay Mike Chick. A Celebration of Life will be held Saturday, October 30, 2021 10:00 a.m. at Westside Baptist Church. Visitation will be one hour prior to the service beginning at 9:00 a.m. Burial immediately following at Forest Meadows Central Memorial Park Roc’s “After-Party” will be hosted at Fat Daddy’s beginning at 1PM and will be open to all who know and love him. In lieu of flowers, The Chick Family has requested you make donations to Cancer Research via gofundme.com/rocchick

The family of Ralph "Roc" Pridemore Chick created this Life Tributes page to make it easy to share your memories.

Send flowers to the Chick family.