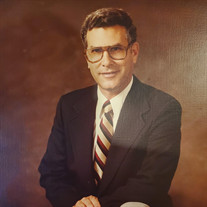 An innovator in journalism education who predicted the demise of print and rise of Internet media, Ralph Lowenstein is dead at age 90. He suffered a sudden stroke and died Monday, August 10 in Gainesville, Florida. Lowenstein was dean of the... View Obituary & Service Information

The family of Ralph Lowenstein created this Life Tributes page to make it easy to share your memories.

An innovator in journalism education who predicted the demise...

Send flowers to the Lowenstein family.