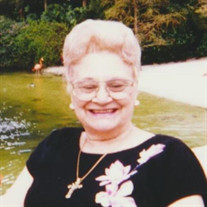 Rachel Battaglia Mecholsky, age 98, passed away early Monday morning, November 1, 2021, at her home. She was born on October 14, 1923 in Glassboro NJ, one of eight children born to Santo and Rosina (Ponzio) Battaglia of Italy. She was a powerful, self-directed woman of utter confidence and a pioneer in many areas. She left all she met with an indelible impression, always giving help and never walking away a stranger. With very little formal education, she owned and ran the Rosebud Flower and Gift Shop in Paulsboro, NJ for over 60 years, designing flower arrangements of any request. Among many other activities in life, she served as president of the Ladies Auxiliary at St. John’s Church in Paulsboro and worked as a “Rosie the Riveter” at the Socony Vacuum (later Exxon–Mobil) plant during World War II. Just before the war, she met John Mecholsky, and they married in 1941. They had one son, John (Jack), whom they both loved devotedly and completely. After her husband passed away in 1974, she continued to run her store, an institution in the city, where her natural sociability made her friends wherever she went and ensured she always lent a helping hand to those in need. After retiring at the age of 80, Rachel moved to a Maryland senior complex where her magnetic presence, thorough integrity, and quick wit made her the only person trusted enough to be treasurer of the Bingo club. She moved to Gainesville, FL in 2011 to be closer to her son and his wife, Susan, and she continued to play bridge weekly, meet hair appointments biweekly, and travel often, until she was no longer physically able in recent weeks. She is survived by her son and daughter-in-law, her four grandchildren (John, Nick, Kristopher, and Sarah), two nephews and ten great-grandchildren. A Catholic funeral mass will be given on Monday, November 8, at 9:30 a.m., at St. Augustine Catholic Church, 1738 W University Ave. A reception will be held at the Gaineswood Club House (1915 NW 23rd Avenue, Gainesville) at noon that same day. The family will receive friends, Sunday, November 7, 2021 from 3:00 p.m. to 5:00 p.m. at Williams-Thomas Funeral Home Downtown, 404 North Main St.

Rachel Battaglia Mecholsky, age 98, passed away early Monday morning, November 1, 2021, at her home. She was born on October 14, 1923 in Glassboro NJ, one of eight children born to Santo and Rosina (Ponzio) Battaglia of Italy. She was a... View Obituary & Service Information

The family of Rachel Mecholsky created this Life Tributes page to make it easy to share your memories.

Send flowers to the Mecholsky family.