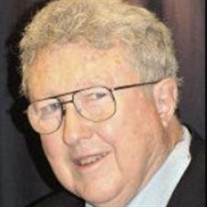 Robert Joseph Hanrahan passed away peacefully on the morning of August 30, 2021. He was born on January 7, 1932, in Chicago, Illinois to Lucille Florence (Granger) and James Richard Hanrahan. He had a happy childhood in Woodstock, Illinois and spent summers in Lake Geneva, Wisconsin, and graduated from Campion High School in Wisconsin, a Jesuit boarding school. He earned his bachelor’s degree in Chemistry from Loyola University Chicago in 1953 and his Ph.D. from the University of Wisconsin, Madison in 1957. He met his future wife, Mary Ellen Hogan, in Madison, where she also studied at UW. Mary Ellen and Robert were married in 1957 then proceeded to Leeds, England where Robert was a postdoctoral fellow at Leeds University. In 1958 he joined the faculty of the University of Florida as an Assistant Professor of Physical Chemistry. He became an Associate Professor in 1964, and Full Professor in 1971. In 1976 he was honored with a sabbatical at the Hahn-Meitner institute in Berlin, Germany, an adventure for the entire family. He served as chairman of the Physical Chemistry Division from 1977 to 1986. He was awarded Emeritus status in 2003 and remained active in research until 2009. In his career at UF, Professor Hanrahan mentored over twenty PhD students and dozens working on their master’s degrees. He happily taught graduate and undergraduate students in general, physical and radiation chemistry at UF for nearly 45 years. His principal areas of research in radiation chemistry and photochemistry contributed to understanding topics ranging from depletion of the upper atmosphere ozone layer to patents in solar hydrogen generation and pathways to carbon dioxide capture and use. For 45 years, Professor Hanrahan shared resources with his friend and colleague, Professor Luis Muga, in their labs in the Nuclear Science Building. He was active in professional societies particularly the American Chemical Society, the Radiation Research Society, and the American Physical Society. One of his most cherished and successful graduate students, Dr. A.R. “Ravi” Ravishankara, shared memories such as, “He had the bluest eyes I’d ever seen,” and “Even today as I consider my research, I hear Hanrahan saying, “Think of the strength of the bonds between the chemicals to know how they will react in the atmosphere.” When noting that his star student had been missing from the lab he said “Ravi has a high vapor pressure,” which of course everyone understood to mean he’d momentarily disappeared. The Hanrahans regularly entertained his many graduate students and introduced the international scholars to American holidays like Thanksgiving. It was a pleasure to help them resettle and grow their families and careers in their new home. Dr. Hanrahan was a devout Catholic, a fan of Irish music and old movies, and an avid teller of what Mary Ellen called “shaggy dog tales” (corny, winding stories with little immediately apparent point). He was an avid photographer and enjoyed travel around the world, including many camping trips with the entire family across the United States and Europe. Robert is survived by his wife Mary Ellen and their children Sheila and her husband Tom Gibson, Robert J. Jr. and his wife Margie Foster, and Pegeen and her husband Tony Malone, and as well as son-in-law David Prince. They have six grandchildren, Matthew (wife Jamie), James (fiancé Brittany), Grace, Evy, Quinn and Tess. Robert is also survived by his brother James (wife Sharon) and sisters Peggy (husband Paul) and Janet. Robert and Mary Ellen’s beloved and accomplished daughter Ann Marie predeceased him in 2017. The family wishes to thank Dr. Bob’s wonderful and dedicated caretakers, especially Denese, Natasha, and Brianna. A Funeral Mass will be held Friday, October 1, 2021 at 2:00 p.m. at Holy Faith Catholic Church.

Robert Joseph Hanrahan passed away peacefully on the morning of August 30, 2021. He was born on January 7, 1932, in Chicago, Illinois to Lucille Florence (Granger) and James Richard Hanrahan. He had a happy childhood in Woodstock, Illinois... View Obituary & Service Information

The family of Professor Robert J. Hanrahan created this Life Tributes page to make it easy to share your memories.

Robert Joseph Hanrahan passed away peacefully on the morning...

Send flowers to the Hanrahan family.