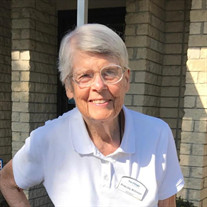 Priscilla “Pris” Frost Milliman, 92, played her “last tennis match” on October 3, 2021, while residing at the Village in Gainesville, Florida. She was born on September 30, 1929 to Priscilla and John Frost in Pasadena, California. She always considered herself a Californian but loved living in Gainesville which was her home for over 46 years. Starting at an early age, Priscilla had a number of interesting experiences while residing first in Pennsylvania (from ages two to six), and then returning to Pasadena. Her highly eccentric (but loving) mother, an avid equestrian, occasionally brought a horse into the family kitchen; took Priscilla to the Santa Anita racetrack to see the famous racehorse Seabiscuit; and was one the very few registered Democrats in their overwhelmingly Republican precinct in Pasadena. With Hollywood nearby, Priscilla also saw, and sometimes met, several well-known movie stars (such as Groucho Marx, Frank Sinatra and especially a very young but irritated Elizabeth Taylor, the latter who lost a dental appointment when Priscilla required emergency surgery for an infected tooth). But she also faced severe personal challenges. Her father died when she was seven; brother Bill, flying an RAF Spitfire, was shot down by German fighters over the English Channel three months prior to Pearl Harbor, and was subsequently provided free room and board for most of the war in Stalag Luft 3, courtesy of the Third Reich; and brother John, on the other side of the planet, participated in the Philippine’s landings. For Priscilla, coming home from school every day meant confronting the possibility that an official telegram had arrived at their house, bearing news that was unspeakable. Following the end of WWII, Priscilla graduated from Westridge School for Girls in 1947 and played on its tennis team which became her favorite lifelong sport. She then graduated from UCLA with a degree in Political Science in 1952. During her senior year she met Jerome “Jerry” Milliman and they were married on November 26, 1952 in Tallahassee, Florida. She worked as a secretary for prominent attorney Leroy Collins, who later became governor of Florida, and in this position she encountered systematic racism. In part through her efforts, several “Jim Crow” practices were modified or eliminated from this law office. She later strongly impressed upon her children the need for equality of people and ethical behavior. She had three boys, Scott and John who were born in Tallahassee and Jim who was born in Bloomington, Indiana. Along with Jerry, who was a Professor of Economics, the family lived in Tallahassee, Los Angeles, and then – from 1959 to 1970 (with a one-year sabbatical in Washington, D.C.) -- in Bloomington, Indiana. While in Indiana, Priscilla had many close friends, was active in the community and was an accomplished tennis player. After returning in 1970 for four years to California she and Jerry made their final move to Gainesville in 1974. Priscilla was an avid and accomplished tennis player as evidenced by her numerous tennis trophies, many of which were won while she was a member of the 300 club, and she played into her 80s. She rooted passionately for Pete Sampras and the Lady Gators tennis team. She also loved to walk in her Suburban Heights neighborhood with her close friends and even well into her seventies it was maddeningly difficult at times for her sons to keep up with her pace. She enjoyed attending many other UF sporting events, including the Gators women’s volleyball games. Priscilla worked for HR Block and was a devoted mother to her son Jim who grew up in Gainesville as well as to many of his friends while they played basketball and swam in the pool at their house. She had many close friends in Gainesville through her associations such as with the Unitarian Church, the 300 club, the Village, and volunteering. Priscilla and Jerry made many memorable trips in the U.S., Mexico (to visit her brother John), and to Europe, including to her sentimentally favorite country, England. (Always an Anglophile, the songs “Rule Britannia” and “There Will Always be an England” were personal favorites.) While in London she visited the memorial honoring the Americans in the RAF “Eagle” squadron (which included her brother Bill, as alluded to earlier). Later in life she was an incredibly devoted in helping her husband Jerry deal with his physical challenges. When her sons came home to visit, she made them all feel like special returning heroes. She was a great listener who always made others feel comfortable; had a funny sense of humor; but was also a wicked player of double solitaire (following in the footsteps of her mother). Her competitive instincts in both tennis and cards were legendary (which for good or bad, were instilled in her children). She also loved dogs (again, a trait passed down from her mother). She was a special grandmother to all of her grandchildren. We are very grateful for all of her friends who visited and supported Priscilla while she was at the Village with special appreciation, among others, to Karen Young. Priscilla is predeceased by her husband, Jerry, and her brothers Bill and John. She is survived by her sons, Scott (Ellen), John (Lynda), and Jim and grandchildren: Jenna, Jeff, Darby, Emma, Jaden, and Jonathon. A celebration of life will likely be held in late December in Gainesville; details will be provided at a later time. In lieu of flowers, donations may be made to the Suncoast Basset Rescue, Inc. or to the Alzheimer’s Association.

The family of Priscilla "Pris" Frost Milliman created this Life Tributes page to make it easy to share your memories.